Hundreds in California strut to bring awareness to sex assault 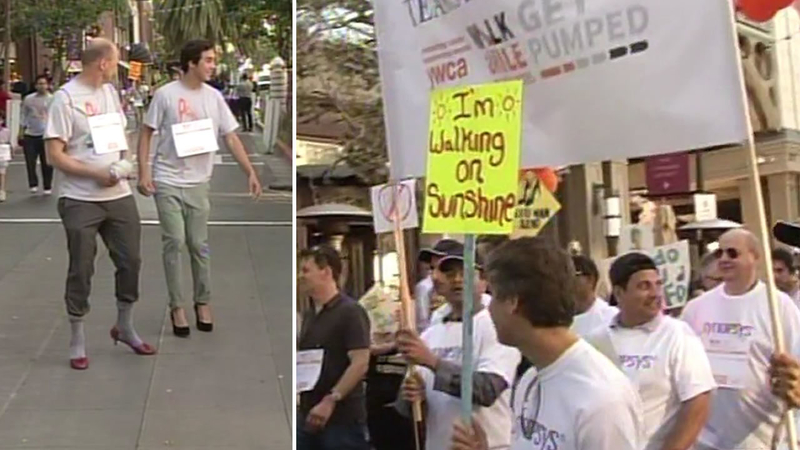 SAN JOSE, Calif. -- Hundreds of men strutted in high heels to bring attention to sexual assault. The Walk a Mile in Her Shoes event in San Jose, California came on the same day that the Brock Turner case made headlines once again.

It's not easy walking in a woman's shoes, which is why some veteran marchers chose wisely.

"One, it has a wider heel than I had last year, so I don't roll my ankles and two, they were cute," said event participant Charlie Sedlacca.

This is the 15th annual Walk a Mile in Her Shoes event in San Jose. The goal is to raise $100,000 and it's also to bring awareness to sexual assault.

The issue is getting a lot of attention due to Brock Turner's six month jail sentence, widely viewed as too lenient.

The Stanford swimmer was convicted of sexually assaulting an unconscious woman, now known under the pseudonym, Emily Doe.

"Now, let's give her back something beyond worldwide sympathy and anger," Rosen said. "Let's give her a legacy that will send the next Brock Turner to prison."

As for the judge in the case, a newly released poll finds that two thirds of Santa Clara County voters want to recall Aaron Persky.

Eighty-one percent found the sentence too lenient and a majority believe it was a sign Persky is not a fair judge. All of which seems to be resonating with the men in the crowd Wednesday, including a young man plans to attend Stanford in the fall.

"Just recognizing the privilege we have and making sure to contribute to a safe environment," said event participant Joseph Matan

It's a sign that some men are man enough to walk in her shoes.

Click here for full coverage on the Brock Turner case.

Some fabulous footwear at "Walk a Mile in Her Shoes" event to end sexual assault. Goal is to raise $100K. #SanJose pic.twitter.com/jdrHGtQQ7E

One of the signs at the #Walk a Mile In Her Shoes" event to end sexual assault. #SantanaRow #SanJose pic.twitter.com/i1nZmTTdau

"Walk a Mile in Her Shoes" event to end sexual assault happening now at #SantanaRow. pic.twitter.com/S9xvPMSiSN