Here's what we thought about these Starbucks secret menu frappuccinos 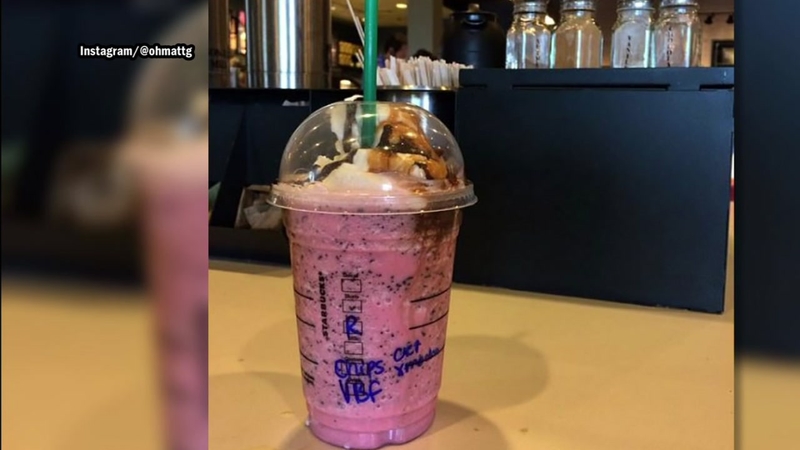 One can't indulge on pumpkin spice and unicorn frappuccinos alone.

With Starbucks rolling out special editions of their ice blended drinks seasonally, wise sippers of the 'Bucks have access to a change-up of flavors beyond just vanilla creme and coffee fraps.

Websites like Starbucks Secret Menu and Hack the Menu offer a database to frappuccino drinkers for recipes they can order, combining the regular menu items and syrups already at the stores.

The recipes are crowd-sourced, gathering info from baristas and avid customers alike.

Recipes are especially imaginative when it comes to blended drinks tasting like favorite candies or cereals, among others. Captain Crunch frappuccinos, anyone?

We tried eight recipes from Starbucks Secret Menu. For the sugary goodness, they offer, some sadly fell short of expectations. Only one, though, reigned supreme.

The recipe calls for a grande hazelnut frappuccino order with two pumps each of toffee nut and cinnamon dolce syrups. A whole banana is also needed to blend, and the drink is topped with the customary whipped creme.

While this item is supposed to conjure a taste of peanut butter, the Nutter Butter mostly tasted of the crackers in the sweet sandwiches. As you'll realize in the descriptions, the drinks will take on some sort of hodge-podge taste.

If you're looking for a blood sugar kick, this might be the top recommendation.

Based on the chocolate-covered wafer candy bar from Canada, this drink calls for a grande vanilla bean frappuccino base, two scoops of java chips, a pump of hazelnut syrup, a half-pump of mocha syrup, two pumps of frappuccino roast, and an optional mocha drizzle for extra chocolate.

It's an intrigue chocolate party in this drink. For any chocolate lover who is looking for that same taste in frappuccino form, this is for you. The java chips add that extra miniature crunch that would get in the Coffee Crisp.

While this isn't exactly oven fresh, this recipe is the closest you can get to that taste. All you need to order is a grande cinnamon dolce creme frappuccino, add two pumps of mocha syrup, blend in java chips and top it with cookie crumbles and chocolate whip.

This is another one that appeals to chocolate lovers. While this isn't necessarily a wind-down drink, vis a vis coffee, the cookie dough frappuccino should be enjoyed after some meal. Just desserts, indeed.

Speaking of dessert, the banana creme pie frappuccino is Starbucks closest attempt to Nilla wafer pudding. You'll need to order a grande vanilla bean creme frappuccino, add a pump each of vanilla and hazelnut syrup, blend in a whole banana and top with whipped cream.
For good measure, you can top the whipped creme with graham cracker crumbles for the true pie effect.

If you love banana nut bread or banana anything and everything for that matter, there's a lot appealing in this drink.

This is the drink for caramel lovers.

You'll need to order a grande java chip frappuccino, add two pumps of toffee nut syrup, and add caramel drizzle in the cup and on top.

While the making of the drink plays off like a caramel macchiato, the toffee nut gives it the true kick to turn it into some kind of hunger-satisfying candy bar.

Yes, there's so much cinnamon to be had in this drink. But, we were a little surprised by the need for a white mocha frappuccino base.

For a grande, you'll need a pump and a half each of cinnamon dolce and hazelnut syrups, cinnamon sugar blended in, and whipped cream topped with more cinnamon sugar.

This should appeal to the childhood breakfast cereal lover in you. Again, it may not necessarily replicate the taste of the popular breakfast item, but the cinnamon should help you cope.

A few years back, several kitschy internet publications made the joke about misidentifying pop singer Ariana Grande for a Starbucks drink. While there were no specifics to what went into the drink, the Starbucks Secret Menu crowd went ahead and made something up.

The creation is as colorful as the part-time actress' hair from her time on the Nickelodeon show "Victorious."

Stay with us here: Order a vanilla bean frappuccino with raspberry syrup, adding extra mocha syrup, extra mocha chips blended together. After that, top with whipped cream and lots of caramel drizzle.

While we were mostly dumbfounded to the taste, Buzzfeed had a perfect description: "Disco techno circus in my mouth."

We saved the best for last because this frappuccino flavor tasted the most like the item it was dedicated to.

Start with a grande coffee frappuccino. Add two pumps of mocha syrup and a pump of hazelnut syrup. Blend in whipped cream. Top with whipped cream and add an optional caramel drizzle.

The Nutella frappuccino is a dream drink since you get the subtle tastes of the actual hazelnut spread in each sip.

It's an easy order and an ideal drink for anyone dipping his or her taste buds into the secret menu for the first time.

You can give these drinks and any other concoction a go through the Starbucks Secret Menu website.
Related topics:
food & drinkstarbucks
Copyright © 2022 KTRK-TV. All Rights Reserved.
STARBUCKS
Starbucks is planning to phase out its iconic cups
Starbucks planning more price hikes this year
Pistachio Latte is back on the Starbucks winter menu
How to get your free reusable holiday cup at Starbucks
TOP STORIES
Shelf cloud seen in Raleigh ahead of line of storms
More than 75,000 pounds of baby formula lands in US amid shortage
Clayton police arrest man in shooting that injured 1
Biden: US would intervene with military to defend Taiwan
Wake County begins giving COVID booster shots for children ages 5-11
Biden: Monkeypox threat doesn't rise to level of COVID-19
Pfizer: COVID vaccine for kids 6 months to 5 years old 80% effective
Show More
Texas woman sought in fatal shooting of pro cyclist: US Marshals
Zibanejad leads Rangers to 3-1 win over Hurricanes in Game 3
Russian sentenced to life in Ukraine's 1st war crimes trial
1 person in hospital after a pedestrian was hit crossing I-95
Event for Ukraine raises money for paramedics on frontlines
More TOP STORIES News