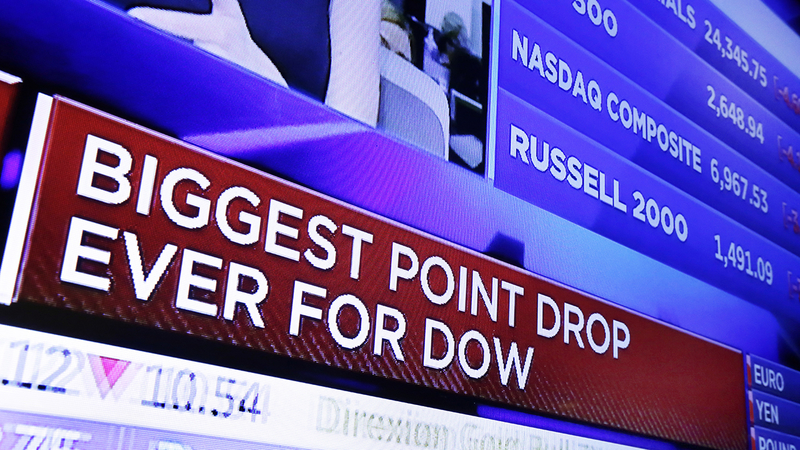 The biggest one-day Dow Jones drop in history came just as President Donald Trump was in Ohio praising the strength of the American economy and jobs.

After the closing bell, one ABC11 viewer wrote on the WTVD Facebook page, "Yikes" and another said, "This is jawing dropping."

It was a rough day certainly, but will it really make a difference in Long-term investments ... Anyone out there concerned about their 401k ??? #ABC11 pic.twitter.com/0s8YXmIJgZ

Advisers at Archer Investment Management, however, said the movement is just ebb and flow of a fluid market.

"It's that stop-start. You got to let it do its thing and it will sometimes be uncomfortable," said adviser Nina O'Neal.

"It happens all the time. It just hasn't happened in 18 months," said adviser Matt Archer. "If the Dow drops 1,500 points at the end of the day, it really doesn't change long term what's going to happen. It's not that big of a deal."

The firm said the best thing for most people is do nothing at all.

Archer said the drop is a chance for folks getting close to retirement to review their investments.

"It's a time for you to take a look at your risk and say am 'I comfortable with it and what direction do I want to take with this?'" he said.

For younger folks, the plunge may be an opportunity to invest and diversify.

"The markets are wide and varied," O'Neal said.

"We made up so much ground in the last year, this is really just a blimp on the radar and I've 30 more years to work before I retire, so I'm in for the long game," he said.

Market professionals warn that the selling could continue for a bit, but many are also quick to say they don't see a recession looming.
Report a correction or typo
Related topics:
personal financeraleighncstockspersonal financepensionsstock marketu.s. & worldretirement
Copyright © 2022 WTVD-TV. All Rights Reserved.
TOP STORIES
Snow, sleet, freezing rain expected again this week
NC legislature votes to further delay primaries until June 7
Third arrest made in Black Friday shooting at Streets at Southpoint
Daniel Turcios shot 5 times after crash on I-440, RPD reports
'He was special': Durham friends remember Andre Leon Talley
'We can't get any more': Store struggles to restock shelves
Victim in fatal I-85 crash was just 3 months old
Show More
19-year-old charged in wreck that left 2 Marines dead
Earnhardt Jr. to be inducted into NASCAR Hall of Fame
Raleigh man feels lucky to be alive after bullet found above his bed
2-year-old accidentally shot himself in Harnett County
Biden, 1 year in, says nation weary from COVID but in a better place
More TOP STORIES News