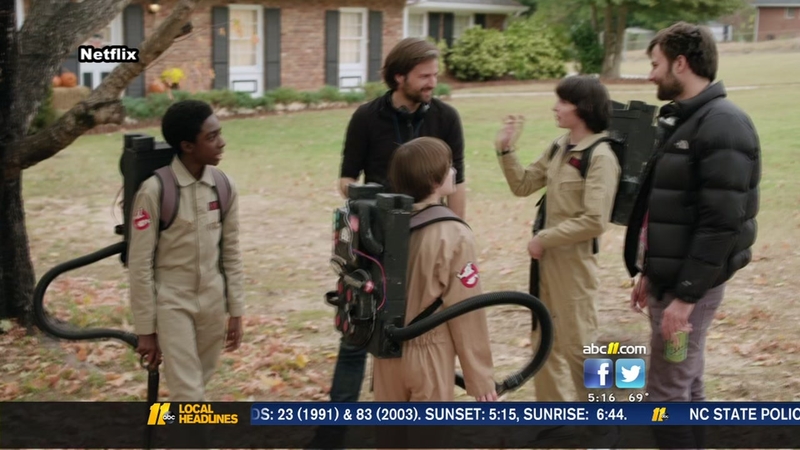 DURHAM (WTVD) -- Stranger Things 2 is a big hit on Netflix that many like to binge watch, but did you know that the creators and writers of the series are from the Triangle?

While Stranger Things is set in the fictional town of Hawkins, Indiana, street names like Mt. Sinai and waterways like the Eno River and Jordan Lake give away the hometown of show creators Matt and Ross Duffer - Durham.

The Duffer Brothers (as they're known professionally) littered the show with Easter eggs, name-dropping the Lochn'Ora neighborhood in Season Two.

"As much as Stranger Things is an ode to you know the films of our childhood that we grew up loving, it's also an ode to our childhood," Ross said. "So, that's why we like to do those little shout outs, because really more than anything, it's just about us and our friends."

In Season One, one of the main characters ran for his life before disappearing into the "upside down," near an intersection that actually exists near Lochn'Ora.

"We have Mirkwood which is, of course, at the intersection of Cornwallis and Kerley, which is really close to where we grew up," Matt said.

While some Bull City natives have picked up on these landmarks, there's one local Easter egg almost no one knows about.

"When Dustin's on the phone, pretending he's looking for the cat, he's talking to Mr. McCorkle," Matt said. "Mr. McCorkle is our neighbor growing up. That's deep cut; you have to live in our neighborhood to know that one."

All of the mayhem takes place close to the Duke School - where the Duffer Brothers went from elementary through middle school - forging some of those long-lasting friendships that inspired the show and a love for storytelling.

"Matt, in fifth grade, started writing fantasy stories," Dave Michelman, Head of School at Duke School said. "And the students were so into it, the first five minutes of every English class was Matt reading his story and it ended up being 30 to 35 pages long."

So, with all the local love - will the Duffers ever return to Durham?