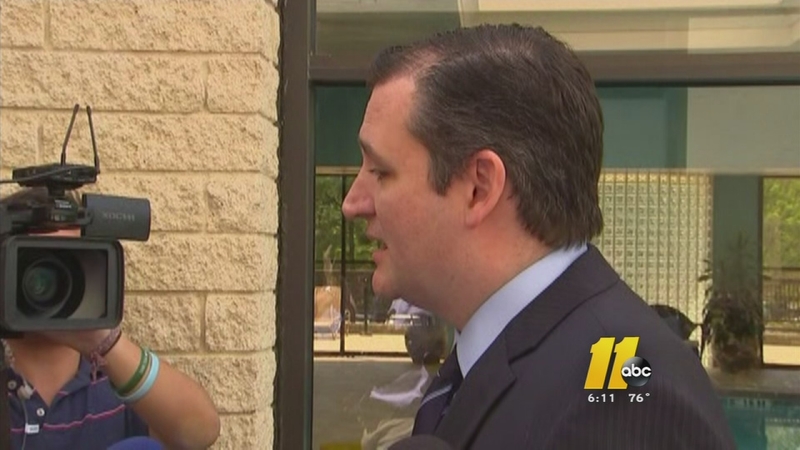 RALEIGH (WTVD) -- Ted Cruz arrived in Raleigh Monday to help dig an even deeper foothold with conservative voters. Since the junior senator from Texas announced he was running for president in March, he's shot up in the polls here.

PPP, a Democratic pollster in Raleigh, showed a dramatic rise in support from North Carolina Republican voters. Cruz's support rose from 5 percent over the winter to 16 percent now.

Cruz found a receptive audience at the North Raleigh Hilton where he addressed a crowd of conservatives from across the state at a $100 a ticket luncheon hosted by the John Locke Foundation.

"We're standing just like the Reagan revolution with an army of courageous conservatives saying enough is enough," Cruz said to applause.

"Leading from behind is a dismal failure," he said. "We need to get back to the principles that made America strong. We need to restore America's leadership."

Cruz was the first major contender to enter the race, but the field is quickly growing.

The Texas republican had only kind words for Marco Rubio, his Republican colleague in the Senate and now rival for the GOP nomination.

Cruz is not a fan of Hillary Clinton's candidacy. He told reporters a Clinton presidency represents the failed policies of the past. He began his speech in Raleigh with a joke at the former Secretary of State's expense.

"Ready for Hillary has their first major hire -- the director of email security," Cruz said to laughs referring to the controversy over Clinton's use of a personal email account during her time at the State Department.

Many in the room to hear Cruz said they self-identify as "conservative" more than "Republican." They see the firebrand first-term senator as one of them.

Joanne Muller traveled from the coast to Raleigh to see Cruz in person.

"I am so thrilled that this man has the guts to stand up and say what [America] needs to do," she said.