Tens of thousands march against gendered violence in Paris 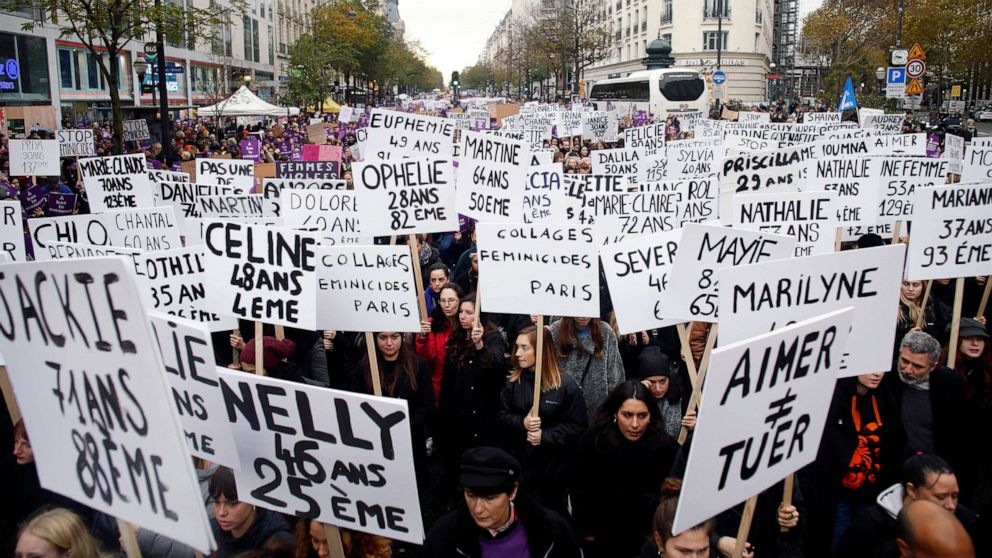 Paris -- Yellow vests were traded for purple scarves and banners in France's capital for a massive demonstration against sexism and sexual violence against women.

There were 49,000 demonstrators on Saturday according to a consulting firm cited by local media, although the collective said there were 150,000. Thousands also protested in several other cities in France, including Lyon, Montpellier and Rennes.

The feminist collective Nous Toutes, which was created after the #MeToo movement broke out in the United States, called for the demonstration, and the families of victims of femicide led Saturday's procession.

The demonstrators want President Emmanuel Macron's government to give 1 billion euros to shelters and psychological support for women fleeing violent homes. They also want perpetrators of sexual violence to wear electronic bracelets to keep them away from their victims, as happens in Spain.

On Monday, the United Nation's International Day for the Elimination of Violence Against Women, French Prime Minister Edouard Philippe announced among other measures that two accommodation centers for men guilty of sexual violence would be built in every French province by 2022 to prevent recidivism.

In a press release, the collective Nous Toutes expressed "a disappointment as high as the great expectation raised over the last few months" of the prime minister's announcements.

This year alone, 137 French women have been killed by partners, according to the feminist collective Feminicides Par (Ex) Compagnons.

According to Eurostat, France has the highest number of femicide in Europe after Germany.

France recently received a scathing report from the Council of Europe that criticized French legislation for lacking appropriate protection for vulnerable women from sexual abuse and assault. The report pointed to "the inadequacies of the penal response to violence" and in particular the judicial practice of "allowing to reclassify the crime of rape as a misdemeanor of sexual assault."

In November, French cinema was taken by storm after director Roman Polanski was accused for the fifth time of sexual assault, this time by a French photographer Valentine Monnier. The French-Polish director denied these allegations through his lawyer Hervé Temime.