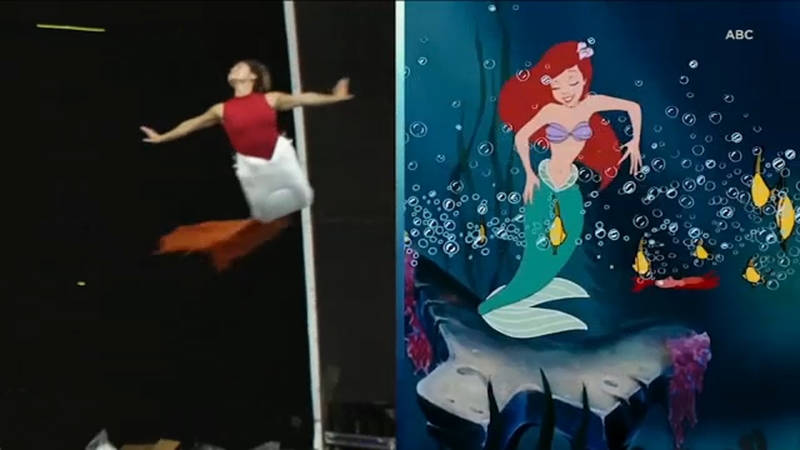 "The Little Mermaid Live!" set paints a dreamy under the sea scene, fit for an all-star cast. Here's a peek at the sound stage, plus a behind-the-scenes look at the dress rehearsal.

The elaborate sound stage is located on the Walt Disney Studios lot in Burbank.

This unique version of "The Little Mermaid" will include familiar animated scenes plus live musical numbers. It'll be an old favorite, told in a new way.

"Everything that you love about 'The Little Mermaid' is still perfectly, 100% intact," Stamos said.

"The Little Mermaid Live!" star John Stamos says the show appeals to audiences of all ages because it's an old favorite, told in a new way.

Stamos is embracing the crazy personality of Chef Louis in his performance. The actor said all the details - from the sets to the costumes - have floored him every step of the way.

"It's just beautiful Disney magic. I promise you, everybody should watch this," he said.

RELATED: Everything you need to know about 'The Little Mermaid Live!'

Stamos added that the event will be enjoyable for all ages.

"The movie is 30 years old, so I'm sure there's a lot of parents out there that grew up with 'Mermaid,' and now they can watch it with their kids. But instead of just watching the movie as is, this is just a special, extra moment that will just sort of burst out of the screen," Stamos said.

"You have the animated side of things carrying the plot forward, so everybody gets their fix of nostalgia. But then we're sprinkling on a little something new for all the big, fat musical numbers," Phillips said.

All the actors said they were awestruck when they saw all the many, moving parts of "The Little Mermaid Live" come together.

"Oh my gosh, it was really amazing. I've seen renderings of it, we've seen drawing. We've dreamt about it ourselves, but I remember Graham and I, who plays Prince Eric, walked onto that stage, and we, our jaws dropped. It's amazing," said Cravalho.