Who is Tom Steyer? What to know about the Democratic 2020 candidate 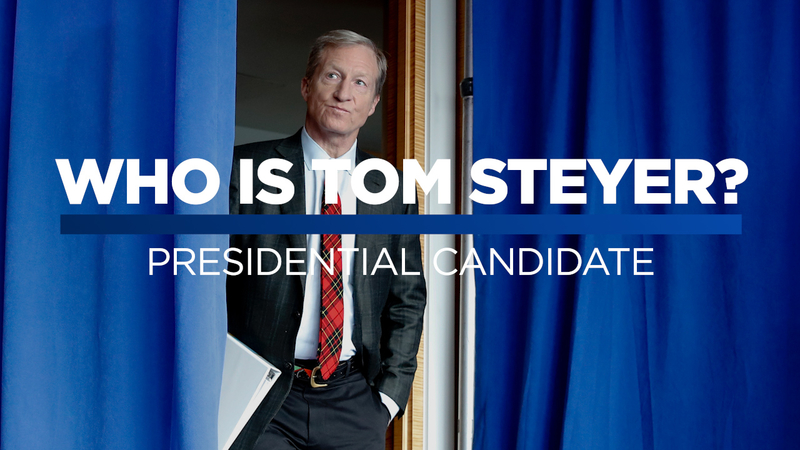 Who is Tom Steyer?

SAN FRANCISCO -- Changing his mind and defying the odds, 62-year-old San Francisco billionaire Tom Steyer throws his hat in the ring for the race seeking the Democratic presidential nomination. But, who is he?

Steyer grew up in New York City the youngest of three brothers.

His father, Roy, was a lawyer who served in the Navy and was on the legal team that prosecuted Nazi war criminals at the Nuremburg trials.

Marnie, his mother, was a journalist and teacher.

RELATED: Democratic debate 2019: List of candidates who made it in first debate for 2020 presidential election

Steyer graduated from Yale and received an MBA from Stanford. In 1986 he moved to San Francisco where he started his own investment firm, Farallon Capital.

After achieving much success, Steyer left Farallon to focus on politics, environmental advocacy and philanthropy with his wife Kat.

In 2013 he founded NextGen America, a grassroots, "a nonprofit group that combats climate change, promotes social justice and increases participation in our democracy through voter registration and grassroots organizing."

Thanks in part to his efforts, Democrats were able to take over the House of Representatives in 2018.

In January of 2019, Steyer decided against running for president but said instead he would focus on impeaching Pres. Donald Trump and created a nonprofit to that end, "Need to Impeach."

In a video posted on YouTube in July, Steyer changed his mind and decided to run for the Democratic nomination for president.