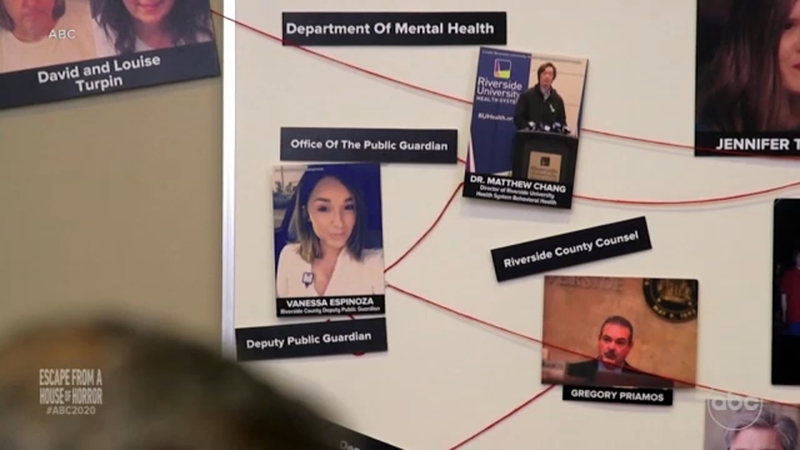 Former guardian of Turpin children to cooperate with investigation

PERRIS, Calif. -- A former deputy public guardian says she will cooperate with Riverside County's investigation into alleged mistreatment the 13 Turpin children, who were held captive and tortured inside their Perris home for years, experienced after they were rescued.

Vanessa Espinoza, who had been assigned to work with the seven adult Turpin siblings, is accused of neglecting her responsibilities to help them find housing, health care, food support, education and other benefits to which they were entitled.

"I have no issue submitting any and all necessary proof to the law firm or departments charged with this investigation," she wrote in a statement on her Facebook page over the weekend.

Espinoza's Facebook statement came eight days after the broadcast of ABC's 20/20 Diane Sawyer special event, "Escape From A House Of Horror." The program looked at allegations that some of the Turpin children -- both the adults and the minors -- have continued to face dangers and hardships since they were rescued and placed in the care of Riverside County. The county became responsible for their care after one of the children escaped in January 2018, leading to the arrest of the parents, David and Louise Turpin, who are now serving life sentences in prison.

Jennifer and Jordan Turpin describe what their futures hold and say they are overwhelmed by the outpouring of support after the "20/20" special aired.

In the statement posted on the Facebook page for the real estate business she operates with her fiancé, Espinoza wrote that she could not discuss many details of the case. She noted that she is aware of the gravity of the situation with the Turpin children and asked for patience.

"While I understand the seriousness of these allegations, I would appreciate the public's recognition that the investigation has to be completed," Espinoza said, adding that she quit her post with Riverside County voluntarily and thus had not been fired.

Riverside County officials and some of the Turpin children have said that they still do not have meaningful access to many of those resources and services, including safe housing, transportation and health care.

"They have been victimized again by the system," Riverside County District Attorney Mike Hestrin told ABC News. "That is unimaginable to me -- that we could have the very worst case of child abuse that I've ever seen ... and then that we would then not be able to get it together to give them basic needs."

In 2018, 17-year-old Jordan Turpin had only been outside a few times in her life. Thinking of her siblings chained back at the house, she dialed 911 on an old cell phone her parents didn't know about.

In response to repeated questions from ABC News, Riverside County Executive Officer Jeff Van Wagenen acknowledged that "there have been instances in which those we seek to protect have been harmed." He said the county has hired a law firm to "conduct an independent and comprehensive investigation" into what happened in the cases of the Turpin siblings.

Officials said the results of the probe will be released publicly when the investigation is expected to conclude at the end of March.