As Ukraine citizens fight back Russian invasion, loved ones in North Carolina worry for their safety 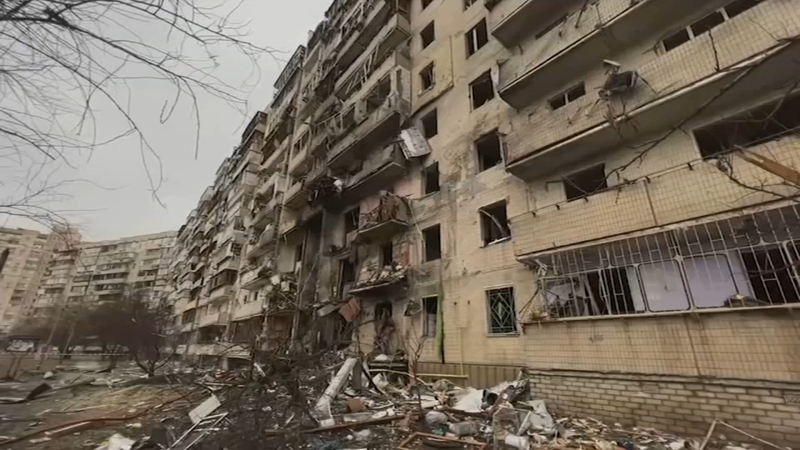 Families with loved ones in Ukraine worry for their safety

CHAPEL HILL, N.C. (WTVD) -- Maryna Kapustina from Chapel-Hill is concerned about her 74-year-old brother, Andrew, in their hometown of Kyiv, Ukraine.

For the past several days he's been hiding in his basement describing to his sister via text the horrific scenes outside his home, as Russian forces strike the capital city.

"There was fighting near (his) neighborhood and he saw the big explosion and basically the fighting over the bridge," Kapustina said.

Maryna says the chaos has been traumatic for her family and friends seeking shelter and refuge, she shared the impact the fighting is having on a 9-year-old she knows.

"When he woke up in the morning when it started from the explosion, it was such a huge shock for him that he was trembling whole day. He has terrible headache," Kapustina said. "I guess everybody waiting for what happens. Everybody still don't believe that they need to leave country. They want to be in Ukraine. They want to help Ukraine."

Ukraine is fighting back, refusing to give up their home and their sovereignty. In response, Putin and Russia's army has now raised the threat of nuclear war.

Local military experts tell me that's a sign that the leader's invasion is not going according to plan.

"We're seeing Russian vehicles running out of gas. We are seeing Russian units looting grocery stores in order to just get food and water to drink. This is not a sign of them having been prepared for a longer haul," said Simon Miles, assistant professor at the Sanford School of Public Policy at Duke. Miles is author of the book, Engaging Evil Empire: Washington, Moscow and the beginning of the end of the Cold War.

"Ukrainian resistance has been very real and it's been highly effective such that Russia's military is struggling to find solutions to the tactical problems the Ukrainian defense, defenders are presenting them with," Miles tells ABC11.

On Monday, Ukrainian and Russian leaders are expected to talk next steps.

"I don't think Putin is the type of person that would come to the table with good faith agreements in mind. He will probably try to bully Ukraine to stop the fighting. Right now Ukraine has the upper hand. How long does that last. I don't know," said Jack Shanahan, retired Lt. General from the US Air Force.


Then there's the growing list of global sanctions against Russia, a lead exporter of energy, crippling the country's economy. These sanctions will undoubtedly result in more impacts here at home.

"What it does do is decrease the supply of energy that is available to Europeans which is decreasing the global pool. Which means there is higher energy prices," said Navin Bapat, a professor and curriculum chair for Peace, War and Defense at UNC. "The other aspect is if there are higher energy prices then there are higher food prices. And that's combined with the fact that Ukraine is now at war and that's a large wheat exporter to the world."

Kapustina is president of the local Ukrainian Association of NC.

She says their has been an outpouring of people want to support refugees asking how they can help.