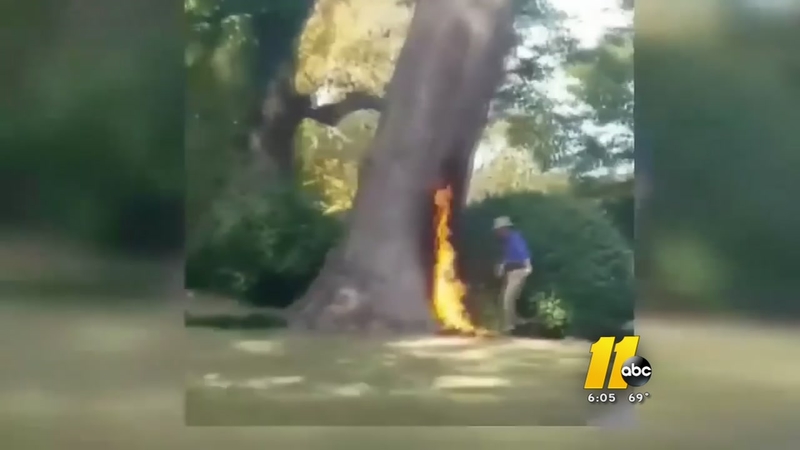 Physics and astronomy professor Dan Reichart sustained first- and second-degree burns to his face and arms during the explosion.

Video from witnesses showed the professor trying to stomp out the fire at the base of the tree moments before the explosion occurred.

While he planned to return to class the week following the incident, his injuries are so severe that the professor said he's done teaching for the semester and can't return until the spring.

Reichart is participating in No-Shave November - a month-long charity campaign which helps raise cancer awareness - for the first time, and he's asking the public to help by turning his lemon into "lemonaid" and donate to cancer research.

While recovering from surgery, he was given a sweet surprise at the hospital - a bouquet of ice cream bars.

Reichart told officials he was on his way to get an ice cream bar when he came upon the fire at the Davie Poplar tree, so a nutrition team at the UNC Medical Center delivered the treats - and then some - that he wasn't able to get.

While Edwards has not been placed under arrested, police said arrest warrants have been filed for six felony charges.

Reichart has not commented on if he intends to take legal action.

Student Will Freeman said he saw Edwards sitting under the tree, on Thursday, moments before the fire started, adding that the suspect starting skipping away saying, "Yes, yes, yes" once flames were present.