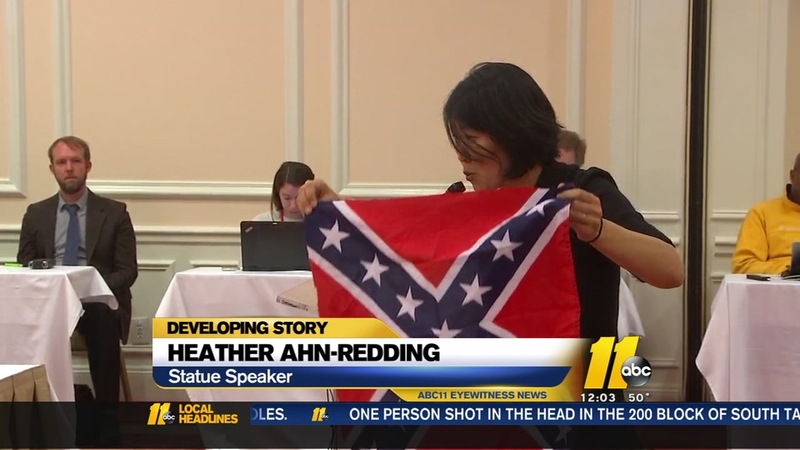 Speakers address UNC Board of Trustees about the Silent Sam statue

CHAPEL HILL (WTVD) -- The UNC-Chapel Hill trustees listened to dozens of people who signed up for the public hearing portion of the school's board meeting Wednesday. At issue: Silent Sam, the Confederate statue facing Franklin Street that makes some people uncomfortable while others say it stands for their ancestors or those who left their homes in North Carolina to fight in the Civil War.

Holding a Confederate battle flag, Heather Ahn-Redding told the trustees: "I hope everyone is distracted because this is what Silent Sam is like on campus. A distraction, and it's uncomfortable."

Others criticized the statue's advocates.

Tom Hardy said, "Those who think that Confederate monuments like Silent Sam are harmless reminders of our past are deceiving themselves, or haven't done their homework."

Another man criticized students and faculty who continue their calls for removing the statue.

"You can hear from every voice around you that this is the noble cause," said Reece Boston, "and yet be so very wrong."

Maya Little said too much money's been spent maintaining Silent Sam since 2014: "That is $40,000 to maintain a statue that glorifies the enslavement of my ancestors. That was dedicated by a man who took pleasure in beating a black woman on our campus, that was erected by a group who praised the KKK as protectors of white womanhood. "

A lengthy, passionate statement from Eunice Brock ended with her declaring, in a shaky voice:

"My feeling is to leave Silent Sam where he is."

That sparked enthusiastic applause by one man.

While the board took no action on the statue removal demand from critics, Chancellor Carol Folt praised the organizers and participants.

"I know that it took a lot of courage for people to stand up here and say who they were and give their name, and tell us what they felt, said Folt. "I don't know if grateful is the right word to express how important that is."

ABC11 has decided to slowly reduce the number of stories on the website that have a comments section. We believe very strongly that our audience should have an opportunity to discuss and debate events in our world, however, we have not been able to moderate the comments as well as we would like. Instead of hosting a platform that could allow a few loud and ugly voices to dominate a conversation, we want to encourage everyone to join us on our social media platforms and speak out there. Facebook: facebook.com/ABC11 Twitter: twitter.com/ABC11_WTVD
Report a correction or typo
Related topics:
politicschapel hilluncconfederate monument
Copyright © 2022 WTVD-TV. All Rights Reserved.
TOP STORIES
A motorcycle's unforgettable ride back home
Trees downed, power outages reported after powerful overnight storm
Record-breaking heat today for Triangle
Driver struggles to get permanent tags for truck bought on Vroom
American Airlines flight veers off runway in Charlotte
Our America: Because I Am | Full episode
Officials remain optimistic as tourism in Wake County booms
Show More
NC State's Tommy White breaks ACC freshman home run record
Violent crime in Durham up 8% during first few months of 2022
Funerals begin for victims of Buffalo supermarket shooting
Decrease in home sales predicted nationwide but NC housing market hot
NY high court to determine if Bronx Zoo elephant is a person
More TOP STORIES News