One day after his death was announced, fans and friends remember UNC's Dean Smith.

The retired Hall of Fame coach died "peacefully" at his home Saturday night, the school said in a statement Sunday from Smith's family. He was with his wife and five children.

"We are grateful for all the thoughts and prayers, and appreciate the continued respect for our privacy as arrangements are made available to the public. Thank you," Smith's family said in the statement.

Smith had health issues in recent years, with the family saying in 2010 he had a condition that was causing him to lose memory. He had kept a lower profile during that time, with his wife, Linnea, accepting the Presidential Medal of Freedom on his behalf from President Barack Obama in November 2013.

At a news conference Sunday afternoon, current UNC Head Head Coach Roy Williams said he has deeply missed having his former mentor around and the phone messages and notes Smith once left for him.

"I loved having him around - having him that involved - and it would have been a blessing for me if he was still involved as the last year and a half have not been the easiest," said Williams.

Williams called Smith a great man who put his relationships with his players ahead of winning. Winning for him was things like Michael Jordan referring to him as a second father.

"He used to say if we would just play well I can handle the losing and I used to say 'Come on coach I got it right we need to win too. I'd rather win and play poorly' but he was a much greater man than me," Williams offered.

Coach Smith was an extraordinary man who cared deeply about people. Known worldwide as a legendary basketball coach, our University, the Chapel Hill community, and the countless students, faculty, staff and people across North Carolina and beyond will remember him as a great teacher and remarkable pioneer in promoting equality and civil rights. For Coach Smith, his players, coaches and staff were family. He was a trusted mentor whose care for his players went beyond the basketball court and continued after they left Carolina. He will be remembered as a great American and true Tar Heel."

Smith coached the Tar Heels from 1961 to 1997, going 879-254 and retiring as the winningest coach in college basketball history. North Carolina won NCAA championships in 1982 and 1993 and reached the Final Four 11 times under Smith.

"It's such a great loss for North Carolina -- our state, the University, of course the Tar Heel basketball program, but really the entire basketball world," said current Coach Williams, who spent 10 years as an assistant under Smith. "We lost one of our greatest ambassadors for college basketball for the way in which a program should be run. We lost a man of the highest integrity who did so many things off the court to help make the world a better place to live in."

"He set the standard for loyalty and concern for every one of his players, not just the games won or lost."

"He was the greatest there ever was on the court but far, far better off the court with people," Williams said. "His concern for people will be the legacy I will remember most."

"He was a mentor to so many people; he was my mentor. He gave me a chance but, more importantly, he shared with me his knowledge, which is the greatest gift you can give someone."

Several prominent basketball figures either played or coached under Smith, including Larry Brown, George Karl, Mitch Kupchak and Williams, who also has guided the Tar Heels to two national championships.

"I'm 64 years old and everything I do with our basketball program and the way I deal with the University is driven by my desire to make Coach Smith proud," Williams said. "When I came back to Carolina, the driving force was to make him proud and I still think that today."

"I'd like to say on behalf of all our players and coaches, past and present, that Dean Smith was the perfect picture of what a college basketball coach should have been. We love him and we will miss him."

On Sunday, UNC-Chapel Hill Board of Trustees issued the following statement:

"As the Carolina family grieves the magnitude of Coach Dean Smith's loss, we can take comfort in considering the profound positive impact his words and deeds had across North Carolina and our nation. Coach Smith was always so much more than a brilliant basketball strategist. He was a father figure to his players, a loyal friend to his associates, a compassionate humanitarian who championed equality, and a strong advocate for the importance of education. He cared about others more than himself. He will forever be remembered as a giant in the history of our great University. We are grateful to his wife, Linnea, and his family for sharing him with all of us for so many years."

As word spread on social media of Smith's death Sunday, fans gathered at the Dean Dome to honor his life, and his legacy.

"How he changed the game of basketball. All of the creative ways he used to coach. I think his mark is left on other coaches as well," said UNC fan Whitney Allen.

"Look at all the impact that he had on civil rights, on basketball, and just being a good person," added UNC sophomore Noa Havivi.

UNC fan Lindsey Kennedy told ABC11, "I always knew this day was coming but didn't really want to think about it before, and now we're all forced to. It's very emotional. Dean Smith was just a remarkable person, so much more than a basketball coach. And I hope the younger generation knows that."

The University of North Carolina at Chapel Hill will celebrate the life of Coach Dean Smith during a public memorial service at 2 p.m., Sunday, Feb. 22, in the Dean E. Smith Center. The public, fans and all who cared about Coach Smith are invited to attend this event. ABC11 and ABC11.com will show the memorial service live.

The family will have a private church service on Thursday morning, Feb. 12.

"We are comforted by the countless gestures and words from people near and far offering their condolences," the Smith family said in a statement issued Monday. "Although we are unable to respond to each individual, we deeply appreciate everyone reaching out to share how Coach Smith touched their lives. We will continue to celebrate his life and remember him, today and forever."

The family has said that in lieu of flowers, individuals should feel free to make a memorial contribution to one of the following organizations:

- The Inter-Faith Council for Social Service, based in Chapel Hill. The organization lives out Smith's values of caring for the poor and those in need.

- Individuals may also give to the charity of their choice to honor Coach Smith and the values he exemplified.

ESPN and the Associated Press contributed to this report. 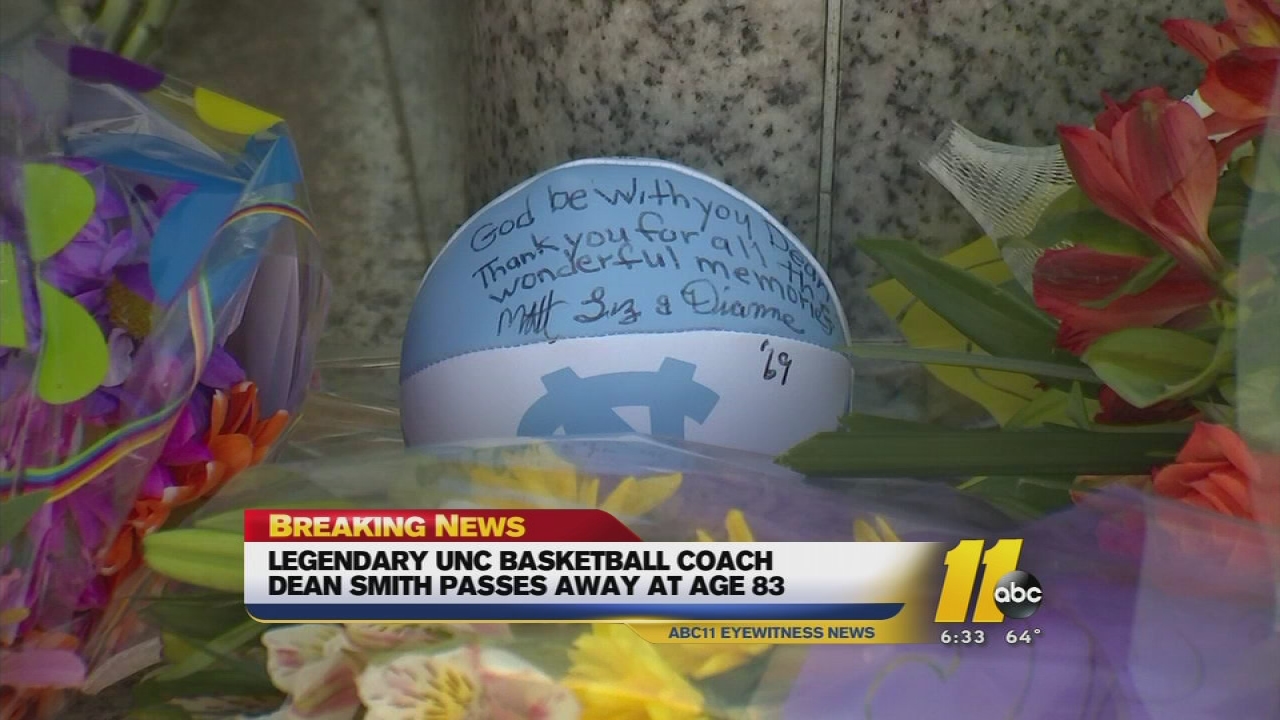