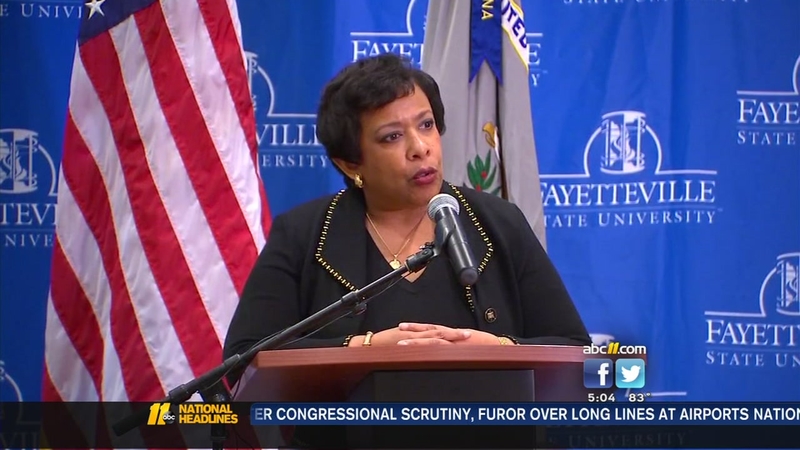 FAYETTEVILLE, N.C. (WTVD) -- U.S. Attorney General Loretta Lynch stood her ground against controversial House Bill 2 as well as praising the Fayetteville Police Department during her visit to Fayetteville on Tuesday.

Lynch visited to celebrate the Police Department's improvements in policy and oversight.

She is encouraging North Carolina police efforts to become more community-friendly. She heard from Chief Harold Medlock as well as community members on what they were doing right to improve relations with the public and the police department's image. She congratulated the police and the community for their co-operation.

The visit is part of her national Community Policing Tour of six communities that excel in areas cited in a report by President Barack Obama's policing task force. The group was created in response to upheaval in Ferguson, Missouri, and elsewhere that exposed the gulf between local law-enforcement agencies and the communities they serve.

Fayetteville police Chief Harold Medlock in 2014 asked the U.S. Justice Department for input on how it could operate better. The federal agency made dozens of suggestions in December and has noted that the racial disparity in police traffic stops is declining.

She also addressed House Bill 2 and says civil rights laws exist for anyone victimized because of a physical characteristic they can't control. Lynch said she disagreed with conservative black pastors and civil rights figures who hours earlier blasted her comparison of House Bill 2 to Jim Crow laws that relegated blacks to inferior opportunities.

"While the Civil Rights Movement, certainly in this state focused on racial discrimination, civil rights and human rights are not limited to any one particular issue or even one particular group of people. Where there are people who feel victimized and are indeed victimized and made to feel vulnerable simply because of a physical characteristic over which they have no control - that is exactly what the civil rights laws are meant to cover," said Lynch.

Those criticizing Lynch included Clarence Henderson. He joined the 1960 Woolworth lunch counter sit-in in Greensboro, North Carolina, an event that energized the civil rights movement. He says civil rights protect how someone is born, while the law addresses transgender people who use public restrooms matching their self-expressed sense of gender.

Lynch also reiterated her stance against HB2, saying it is against the morals and beliefs most of the state holds.