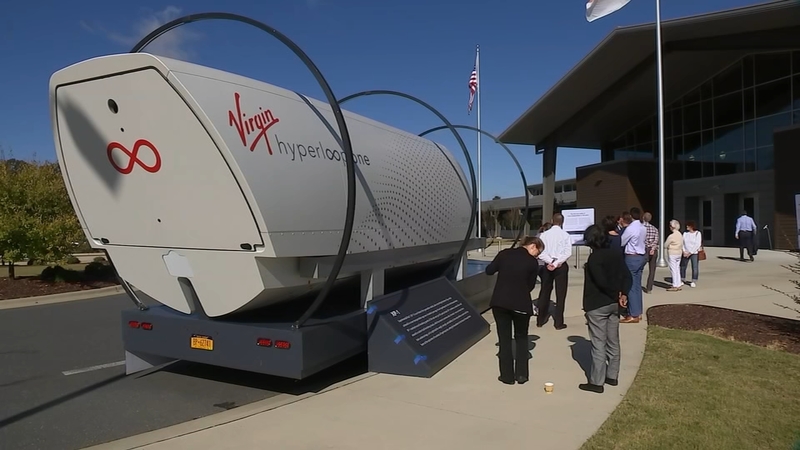 PITTSBORO, N.C. (WTVD) -- It looks like a spaceship out of a science fiction movie sitting in a Chatham County parking lot.

"It's the future. You don't get much of a chance to see the future," Dick Hodgin said.

Hodgin drove to Pittsboro from Raleigh. He said he couldn't pass up the opportunity to catch a glimpse of Virgin Hyperloop One.

"It's not a plane. It's not a train. It's in between and it's a new technology. It's great," Hodgin said.

This pod is the first vehicle to make a successful Hyperloop run, reaching 240 mph in about 500 meters. Experts say it has the potential to reach almost 700 mph.

"So this could be going from Raleigh to Washington or from Durham to Charlotte in times of 30 minutes and even within the Triangle. We could go from Raleigh to Durham in under 30 minutes. That'd be amazing right there especially during rush hours," said Joe Milazzo II, Regional Transportation Alliance.

But Virgin Hyperloop isn't just considering the Triangle as a destination. There's a possibility that by 2024, we could have a test track. With RTP, the company says this area could help build the technology.

"America doesn't have anything like this. We don't have any mode like a bullet train, etc.. So this is America's chance to actually build in America, create jobs here and the Research Triangle in North Carolina could be a really great opportunity for that," said Ryan Kelly with Virgin Hyperloop One.

The country could see its first Hyperloop by 2029. And Dick Hodgin says he's ready.

"Oh, I've already put my name in. I want to be the first person to ride it," he said.