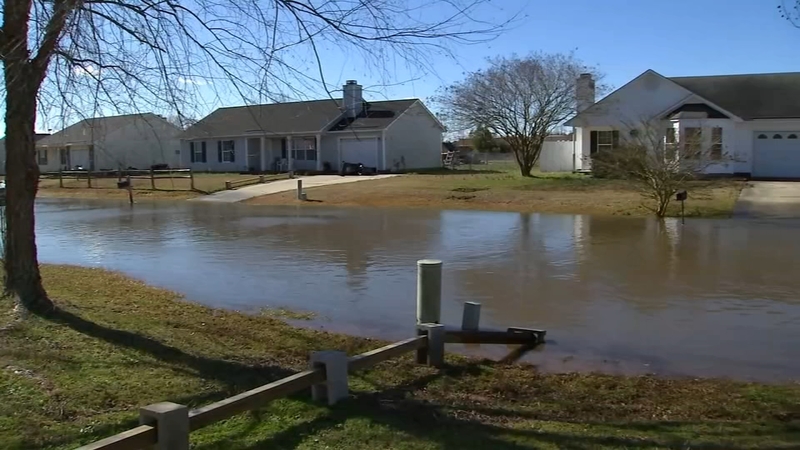 "There's nowhere for the water to run," Blue said. "I'd like for them to come out and fix it."

Friday morning, a man tried to drive out of the neighborhood in his pickup, but the truck stalled in the high water. Firefighters said he was able to get out of his vehicle safely.

Firefighters said the water has not gotten into any homes on the street, but one house was damaged when a tree fell on its roof Thursday night.

Fayetteville officials said they shut down six streets across the city due to floods.

HIGH WATER: Fayetteville residents who live off Reilly Rd and Wayland Drive are trapped inside. This roadway has turned into a river due to flooding #ncwx pic.twitter.com/QTNEdhmtWX

Fayetteville Fire Department said Wayland Drive will be closed until the water recedes.

Northwood's residents, like Louise Pearson, knew flooding was a possibility once heavy rain hit the Sandhills Thursday night. The rain turned the only road leading into the community into an impassable, deep ravine.

"It inconveniences a lot of people. Jobs, myself as a teacher. Children aren't able to get to the bus stop and also people aren't able to get to work," Pearson said. "We just got here last December. Last night we were having to push families out in the middle of the night. They went down and actually measured and saw 18 inches or more."

School excused absences for students living in the community. Brittany Krough received a voicemail from her child's school stating the district would be unable to get a bus into the subdivision this morning.

"We aren't able to get buses to our children. If there was an emergency, paramedics can't even get through," said Krough."We're fed up."