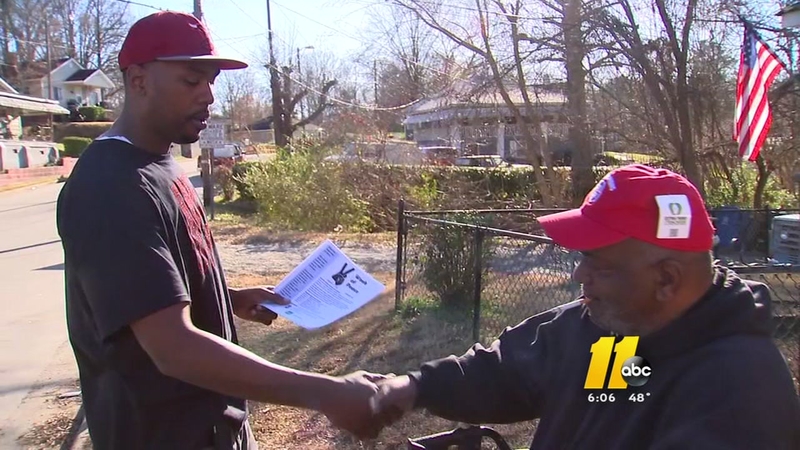 DURHAM, North Carolina (WTVD) -- "It's always been violent, and I've been there all my life," Convellus Parker said.

Parker, a former offender is a changed man, sharing his story as he walks the same streets in Durham that led him to a life of crime.

"For me to be able to step out of the box and do something different and positive, I just want to be able to bring along the guys that were with me in my circle, the ones that I can have an impact on," he said.

Parker is part of a group called Bull City United, a county-wide initiative that began in November, modeled after a similar effort in Chicago, to stop the violence in Durham.

The group visits their neighborhoods daily as role models for change.

David Johnson grew up in Durham's southside, an area infamous for its crime.

"Since we started this program, there hasn't been a shooting in my neighborhood," he said.

Two Christmas Eve murders brought the number of homicides in Durham to 43 in 2016, three of which were self-defense.

The Durham Sheriff's Office says 462 young black and Latino men have been shot since 2015.

"There are so many young people losing their lives. That's what makes it so heartbreaking," Johnson said.

Bull City United is planning a "Week of Peace" from Jan. 1-7.

The group will hold candlelight vigils in eight of Durham County's most violent neighborhoods.

CLICK HERE TO VIEW LOCATIONS AND GET INVOLVED (.pdf)

"That's where I come in as an outreach worker to lead them to these resources to do something different so they don't have to be out on the block every day and be a sitting target for the violence," Parker said.

Parker and his team are asking people to take a pledge to live a violence-free life in the new year.

"We can do better as a community. Everything ain't got to be about violence," he said.