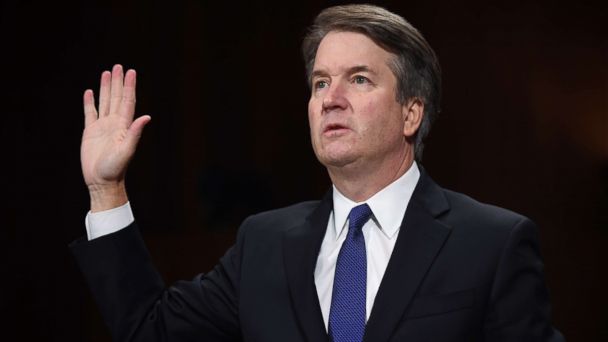 In the last 24 hours, in response to pressure from Democratic and moderate Republican senators, the White House has eased limitations on the FBI background investigation into Supreme Court nominee Brett Kavanaugh that President Trump set into motion on Friday.

Initially, President Donald Trump said he wanted a probe "limited in scope and completed in less than one week."

White House Counsel Don McGahn set parameters on who the FBI could talk to and what topics they could explore, a senior administration official told ABC News.

The White House specifically requested FBI interviews with four people: Kavanaugh high school friends Mark Judge and P.J. Smyth; Leland Keyser, who California professor Christine Blasey Ford identified as at the gathering where she was allegedly assaulted decades ago; and Deborah Ramirez, a Kavanaugh college acquaintance who accused him of sexual misconduct in a separate incident.

Now, sources close to the process say the FBI has been authorized to interview anyone it wants, with a focus on two claims of sexual misconduct against Kavanaugh raised separately by Ford and Ramirez.

"It is now less restrictive on individuals -- but the scope of topics remains the same," one administration official told ABC.

Allegations of sexual misconduct raised by a third woman, Julie Swetnick, who is being represented by lawyer Michael Avenatti, will not be in the purview of the FBI background investigation, sources said.

Kavanaugh has denied all three allegations.

ABC News confirmed that the FBI has already conducted interviews with Judge, Smyth, and Ramirez.

A spokeswoman for Ford tells ABC News she still has not been contacted by the FBI. As of Sunday, Kavanaugh had also not scheduled an interview with the FBI but expected to, his representative said.

Earlier on Monday, Trump continued his fervent support of his Supreme Court nominee Brett Kavanaugh, calling for a "comprehensive" but "quick" FBI investigation into claims of sexual misconduct as the agency works to meet a looming deadline.

Trump, who criticized what he characterized as unfair treatment of his pick to the high court said: "We don't want to go on a witch hunt, do we?"

Kavanaugh faced tough questions from the Senate Judiciary Committee on Thursday on allegations from Ford that he attempted to sexually assault her when they were both high school students in suburban Maryland decades ago.

Ford also testified before the committee on Thursday -- an emotionally charged appearance in which she described in detail what she says happened that night.

On Friday, the White House, after the urging of the Senate Judiciary Committee, directed the FBI to look into what they deem as "credible" claims of sexual assault.

On Monday, Trump said he "would look at" whether FBI witnesses corroborate the accounts of any accusers.

When asked if his administration is putting limits on the investigation, the president said: "My White House is doing whatever the Senate wants. ... It is up to me, but I'm instructing them as per what I feel what the Senate wants."

Those senators include Sen. Jeff Flake, a key Republican vote and member of the Senate Judiciary Committee, who urged on Friday that his GOP colleagues support a supplemental FBI background investigation of Kavanaugh.

"We certainly want the FBI to do a real investigation," the retiring Arizona Republican said at an event on Monday. "It does no good to have an investigation that just gives us more cover. ... We actually need to find out what we can find out."

During her hours-long interview, Ramirez stood by the experiences she detailed to The New Yorker in an article published a week ago, the source added. She alleges Kavanaugh exposed himself to her in college had been contacted by the FBI and had an interview regarding her allegations against Kavanaugh.

She also provided FBI agents with a list of witnesses, a source with knowledge of her interview told ABC News.

On Saturday, Ramirez's attorney John Clune confirmed that the FBI had reached out to her: "We can confirm the FBI has reached out to interview Ms. Ramirez and she has agreed to cooperate with their investigation. Out of respect for the integrity of the process, we will have no further comment at this time," Clune said.

When asked Monday if all three accusers should be interviewed, Trump hedged on his answer.

"I think the FBI should interview anybody that they want within reason," he said. "They should interview, but also be guided. I'm being guided by what the senators are looking for."

Trump later said that he didn't think his Supreme Court pick lied about his drinking during his testimony before the Senate Judiciary Committee.

He then pivoted to his own drinking habits, telling reporters, "I'm not a drinker and I can honestly say I never had a beer in my life."

Trump defended his nominee, saying that many high schoolers "drink beer and go crazy." He was asked if senators find that if Kavanaugh lied about his drinking, would that bar him from being his nominee.

"Well, I've -- I watched him. I was surprised at how vocal he was about the fact that he likes beer. And he's had a little bit of difficulty. I mean, he talked about things that happened when he drank. I mean, this is not a man that said that alcohol was -- that he was perfect with respect to alcohol," Trump said.

Later Monday, a classmate of Kavanaugh's from Yale, Charles Ludington, read a statement to reporters similar to one he made over the weekend that there were "omissions" in Kavanaugh's statements on drinking -- specifically when Kavanaugh denied ever being "blackout" drunk. "There are certainly many times when he would not remember what was going on," Ludington said.

While Ludington conceded he never saw Kavanaugh passed out, he said he'd seen Kavanaugh "drunk to the point he could easily be passed out."

"If he lied about his past actions on national television and more especially while speaking under oath in front of the United States Senate, I believe those lies should have consequences," Luddington said. "It is truth that is at stake, and I believe that the ability to speak the truth, even when it does not reflect well upon one's self, is a paramount quality we seek in our nation's most powerful judges."

One of them, Dan Murphy, said, "I not only socialized with Brett, but I was there with him at the end of the night when we came home, and there in the morning when we got up. I never saw Brett black out or not be able to remember the prior evening's events, nor did I ever see Brett act aggressive, hostile, or in a sexually aggressive manner to women."

Earlier, the president also stood by another ally, Sen. Lindsey Graham, R-S.C., who emerged as a key Kavanaugh supporter throughout the confirmation process.

During Thursday's hearing, Graham said, "This is the most unethical sham since I've been in politics."

At the press conference on Monday, Trump said he thought Graham was "terrific."

"Lindsey Graham I thought was terrific the other day," he said. "He brought up one point that is now being discussed by a lot of people and that's who is going to want to run for office and be in office and take an appointment to not just the supreme court, but many positions?"

Elaborating on a possible backup option if the FBI investigation turns up information that would lead Congress to not move forward with Kavanaugh's confirmation, Trump said, "I don't want to talk about plan B. I hope he gets approved. I hope the report comes out like I really think it should."