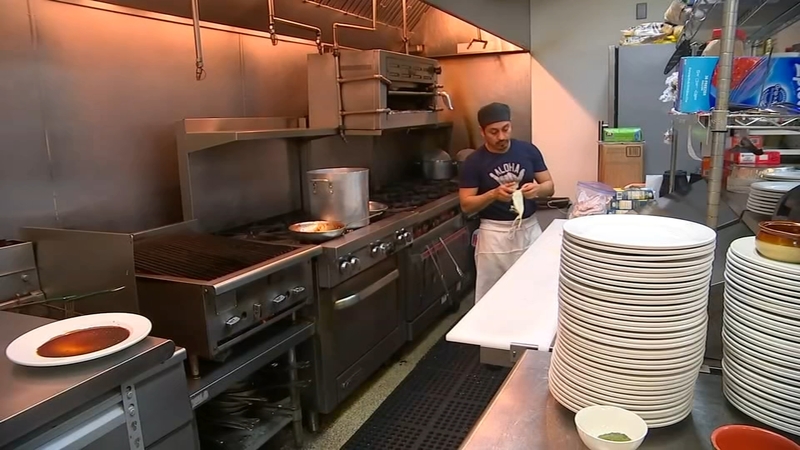 RALEIGH, N.C. (WTVD) -- People are bracing for another batch of weekend wintry weather. Many people said they're looking forward to another weekend of relaxation.

More snow is on tap, which is not the best news for transplants who move here for better weather.

The third dose of weekend hibernation comes during Triangle Restaurant Week. The annual event benefits restaurateurs in a big way.

The Italian restaurant is participating again this year and gearing up for a busy Friday and Saturday.

"I stopped all the reservations. I'm not taking any more," said Privilegi.

He feels lucky, all things considered.

Privilegi has same the front and back-of-house staff as before the pandemic.

Tuscan Blu was affected last weekend by the snow and ice. Some people canceled reservations. If that happens again, Privilegi said it's all right.

"If by chance they don't come tonight, I guarantee they're going to come another day. We're not losing the customer. It may be a bad day tonight, but tomorrow's going to be better, and after tomorrow even better," he said.

About 60 restaurants are taking part in Triangle Restaurant Week. It runs through Sunday.

Businesses grapple with the double whammy of pandemic, wintry weather. Michael Perchick has an update.

Not all restaurants are in as good a shape as Tuscan Blu.

"We all thought by now we'd be in great shape. But it really hasn't happened yet," said Seth Gross, owner of Bull City Solera and Taproom, Bull City Burger and Brewery, and Pompieri Pizza, all three of which are in Durham.

Gross said January is already a tricky month for restaurants, and the effect of increased COVID metrics, combined with severe weather, has exacerbated struggles.

"You get one bad weekend, you kind of hope well, maybe we can still break even. You get two bad weekends in a row, that's out the window. Now it's just let's hope that we don't lose too much money. With this third chance of snow here, and possibly losing a Saturday, it's devastating," Gross said.

The snow and ice have affected shipments of supplies, adding another challenge to an already strained supply chain.

"We had a bunch of our deliveries that were supposed to come (last) Friday and they were all canceling because earlier in the week we all thought Friday was going to be the big day," said Gross, while referring to last weekend's severe weather.

Gross is hopeful for a strong spring, with warmer weather and potentially improved COVID metrics would make more people comfortable returning to restaurants. His locations offer outdoor seating and take-out, two options for people who still do not want to eat inside, but want to support local restaurants.

"I don't know how much longer most of us can survive. For us cash is really starting to pinch," said Gross.

On the other end, hardware stores have been busy all month, with people coming in to buy shovels, salt, sleds, as well as winter clothing.

"Surprisingly, it's been a lot better than it was in years past. People are actually preparing ahead of time with time to spare and not waiting till the last minute. So we've had a constant flow of people coming in for ice melts, people coming in for sleds, and they've been pretty, pretty nice to us when we don't have it, because it sometimes happens. I think this year they've been nicer than the previous years," said Lauren Rathbon, manager of Public Hardware Inc. in Durham.

That preparation has also made it easier for the staff to order properly, and keep shelves stocked.

"It has helped us out tremendously. For instance, we ran out of ice melt on Wednesday of last week, and we were able to get some on Thursday. Now if you had waited for Friday to do all that, I don't think we could have gotten ice melt in Friday afternoon for Saturday," Rathbon explained.

She added that weather stripping has been a popular item, with people trying to lower energy costs after turning up the heat in their homes.