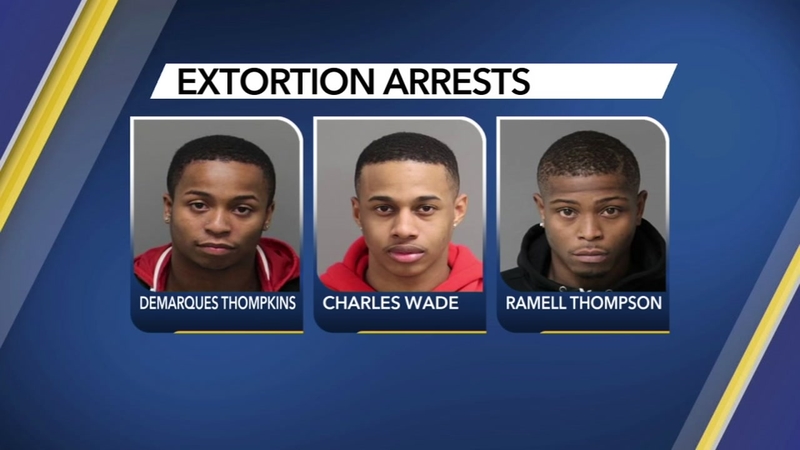 DURHAM, N.C. (WTVD) -- A Durham 19-year-old who went online looking for sex told ABC11, "I wanted to experience something like I've never done before."

Instead, he got a completely different experience.

The teen and two Raleigh men fell victim to an extortion scheme, according to Raleigh police.

Arrest warrants show the men were scammed out of thousands of dollars after going online looking for sex.

Police have charged Charles Wade III, 21, Ramell Thompson, 22, both of Raleigh, along with Demarques Thompkins, 20, of Chicago with extortion and conspiracy.

According to court documents the three took not only the $2,700 from the Durham teen but also $5,000 from a Raleigh man.

It's not clear from the records what, if anything, was taken from a third victim, also a man from Raleigh.

The teen from Durham didn't want to be identified but he told ABC11 he went online and found a woman who agreed to meet him on the fifth floor of the Doubletree Hilton hotel on Hillsborough Street in Raleigh.

But when he showed up there Dec. 4 he was instead greeted by someone wearing a wig, talking in a falsetto voice, and taking a video of him.

On the video, the person asks, "You didn't call me?"

The teen responds "No, I called someone else."

The teen says the person looked nothing like the picture he saw on the escort service website.

"I was like, 'Um, you're not the woman that I wanted to see. Like I'm pretty sure you're a guy.' And that's when he started to say like, 'I have this video of you so are you going to give me the money or do I have to send this to your family, friends, work, police, and everything?"

The teen said he turned over the $200 in cash he had with him but the suspect demanded $3,000 to keep from informing the victim's family

"For them to find out that I had to do, that I had to go online to do that I felt like that would have disappointed them a lot so I didn't want them to know anything," he said.

So the teen said he agreed to walk to a nearby ATM and withdraw more cash.

He even had to contact the bank to lift a cash limit but even then could only get another $2,500.

In the end, he decided to tell his family.

His mother and brother encouraged him to go to police to try to stop the criminals before they blackmailed more victims.

Even after the arrests, he said he feels there are more than three victims.

"There's going to be probably more people that have done the same thing but they haven't reported," he said.