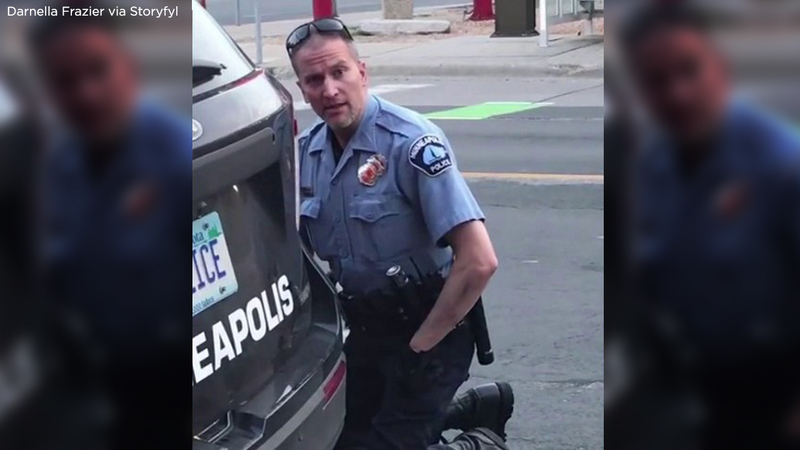 A white Minneapolis police officer who knelt on George Floyd's neck opened fire on two people during his 19-year career and had nearly 20 complaints and two letters of reprimand filed against him.

Derek Chauvin, 44, became the focus of street protests and a federal investigation after he was seen in cellphone video kneeling on the neck of Floyd, a 46-year-old a black man, for almost eight minutes Monday night during his arrest on a suspicion of passing a counterfeit bill. Floyd, who was handcuffed and heard saying he couldn't breathe, was pronounced dead later that night.

Chauvin, whose driveway was splattered with red paint and the graffiti "murderer," has not spoken publicly since Floyd's death and his attorney did not respond to calls seeking comment. He and the other three officers involved in Floyd's arrest were fired Tuesday.

Minneapolis City Council records show that Chauvin moonlighted as a bouncer at a downtown Latin nightclub. A former owner of the club told KSTP-TV on Thursday that Floyd also worked security for the club up to the end of last year. But Maya Santamaria, who the station reported owned the El Nuevo Rodeo Club for nearly two decades before selling the venue this year, said she didn't know if the men knew each other because the club often had a couple dozen security guards at a time.

In 2006, Chauvin was among a group of six officers who opened fire on a stabbing suspect after a chase that ended when the suspect pointed a sawed-off shotgun at them. The suspect, Wayne Reyes, was hit multiple times and died. A grand jury decided the use of force was justified.

Two years later, Chauvin shot Ira Latrell Toles as he was responding to a domestic dispute.

According to a Pioneer Press account of the incident, a 911 operator received a call from an apartment and heard a woman yelling for someone to stop hitting her. Chauvin and another officer arrived just as Toles locked himself in the bathroom. Chauvin forced his way into the bathroom. Toles went for Chauvin's gun and Chauvin shot him twice in the stomach. Toles survived and was charged with two counts of felony obstruction.

Toles told the Daily Beast that the mother of his child called police that night and he fled into the bathroom after officers broke down the apartment door. Chauvin then broke down the bathroom door and started to hit him without warning. He said he fought back in self-defense and was too disoriented to go for Chauvin's gun.

Toles said he ultimately pleaded guilty to a misdemeanor charge and still feels pain from the shooting.

"He tried to kill me in that bathroom," Toles said.

Online city records also show that 17 complaints have been filed against Chauvin. Sixteen complaints were closed with no discipline. The remaining complaint generated two letters of reprimand, with one apparently related to the use of a squad car dashboard camera. The records don't include any details on the substance of the complaints.

Chauvin also was among a group of five officers in 2011 who chased down a man named Leroy Martinez in a housing complex after they spotted him running with a pistol. One of the officers, Terry Nutter, shot Martinez in the torso. Martinez survived. All the officers were placed on leave but absolved of any wrongdoing, with Police Chief Timothy Dolan saying they acted "appropriately and courageously."

Less is known about the other three officers involved in Floyd's arrest.

Online court records indicate that the officer who stood guard at the scene, Tou Thao, was sued in federal court in 2017 for alleged excessive force. According to the lawsuit, Lamar Ferguson claimed Thao and his partner stopped him as he was walking to his girlfriend's house in 2014 for no reason and beat him up. The city ultimately settled the lawsuit for $25,000.

City records show six complaints have been filed against Thao. Five were closed with no discipline. One remains open. The records didn't include any further details.