WTVD
By Ed Crump
RALEIGH (WTVD) -- In the wake of Thursday's pardon of two men who were once on death row, some are now asking Gov. Pat McCrory to lead the fight to abolish capital punishment.

Leaders of several organizations gathered at the state headquarters of the NAACP in Durham on Friday for a news conference.

The conference was originally planned to put pressure on the governor to issue the pardons for Henry McCollum and David Brown, the men who were once on death row.

McCrory had been considering them for nine months since the men were released from prison, after a judge decided someone else had raped and murdered an 11-year old Robeson County girl 30 years ago.

Friday, the group thanked the governor for the pardon, but immediately began to pressure him to abolish the death penalty in North Carolina.

"Governor McCrory should become the lead advocate for ending the death penalty based on his pardon," said state NAACP president Reverend William Barber.

Barber says it should be obvious to the governor and other death penalty supporters that the case of the men who were pardoned is a perfect example of innocent people who may have been executed.

Those gathered at the event, many of them from Christian-based organizations, say they have no doubt that North Carolina has executed innocent people.

They say fellow Christians who support the death penalty should realize that it is a sin they can no longer live with.

The head of People of Faith Against the Death Penalty said the vast amount of money used to maintain the death penalty could instead be used for those affected by murder.

The group's head, Stephen Dear, noted that some states that have abolished capital punishment 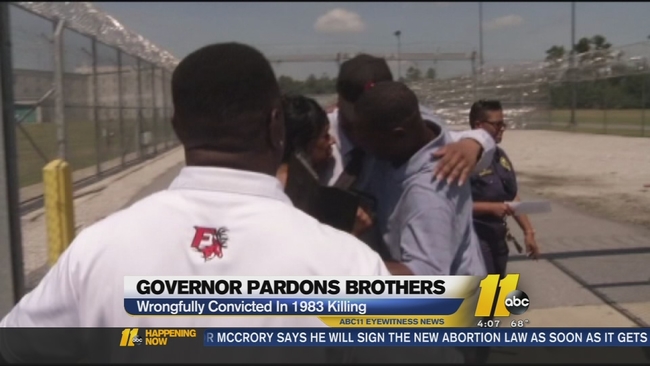