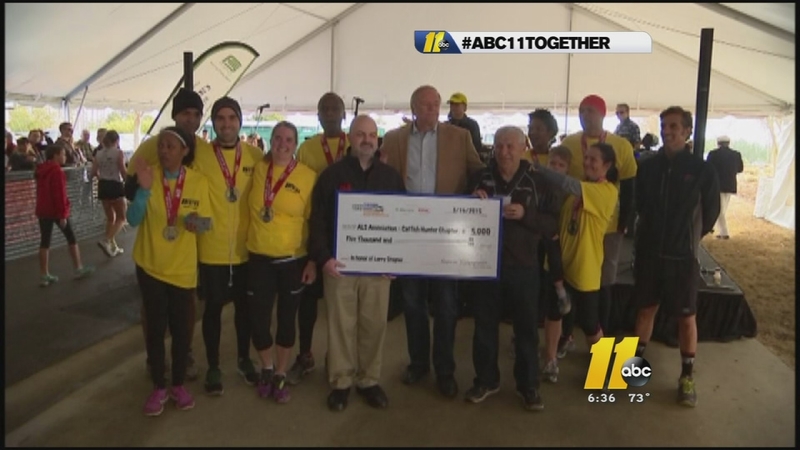 CARY, N.C. (WTVD) -- ABC11 Together was a proud sponsor of Sunday's Tobacco Road Marathon in Cary.

Not only has this race established itself as a premier event in the Triangle, it's also giving 100 percent of its proceeds back to the community. That includes one organization that is near and dear to the ABC11 team.

Named one of America's top marathons by Runner's World Magazine, the Tobacco Road Marathon in Cary drew runners from near and far, including the second place male finisher in the half-marathon who traveled to Cary from Oregon.

"Well for one, it's once race I've never done. Second, I want to run in the Olympic trials in January so I kind of wanted to test my foot in this and see where I'm at," said runner Nick Schuetze.

The race also attracted first-timers and their loved ones who came to cheer them on.

"It means the world to me that my family was here to support me. This is something I never thought I wanted to do," said runner Elizabeth Scarboro. "But when I decided to do it I just put my heart into it."

Others ran for personal reasons, including a firefighter in full-gear running to remember his fallen brothers and sisters.

Some members of our ABC11 news team, both on-air and behind the scenes, ran as well, dedicating their efforts to Larry Stogner. Larry was there to meet them at the finish line.

"One of the side effects of ALS is that you become more emotional and I was getting choked up as Nicole and Amy and different people came across the finish line," Larry said.

Following the race Larry was part of a special check presentation, donating $5000 to the ALS Association.

"Well anything I can do for ALS at this juncture in my life, I'm going to be there and I'm going to give whatever I can both in my time and my money," said Larry.

His personal donation was matched by the Tobacco Road Marathon, which was on top of the nearly $500,000 in race proceeds that will go to local charities.