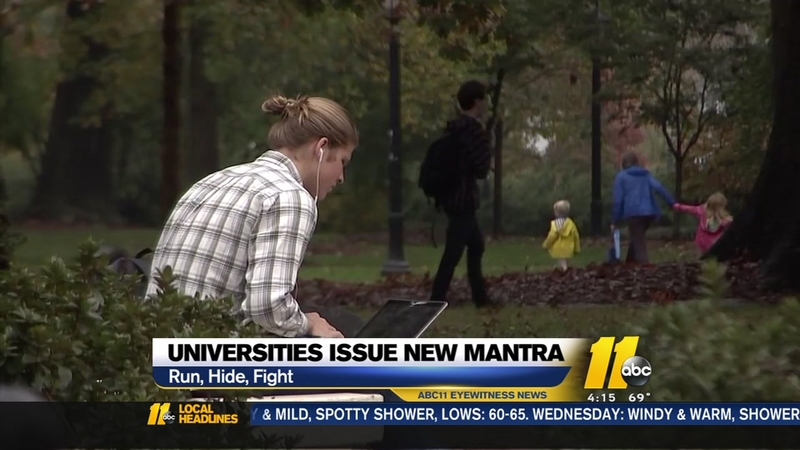 After a violent attack unfolded on Ohio State University's campus Monday, some college students in the Triangle are wondering whether they would know how to respond if faced with a similar situation.

Campus police in Ohio alerted students on Twitter with the message:

Eleven people were injured when police said Somali-born student Abdul Razak Ali Artan plowed his car into a group of pedestrians on campus then got out and started stabbing people with a butcher knife.

A campus police officer shot and killed the attacker.


The message to 'run, hide, and fight' comes directly from the Department of Homeland Security, instructing people to first, find a safe way to escape; second, hide from the shooter; and as a last resort, try to physically stop the attacker.

Police departments at NC State University, UNC-Chapel Hill, and Duke University offer a similar message with a training video posted to their respective websites, where actors showcase the recommended protocol.

On NC State's campus, the message is to "Get out. Chill out. Take out." But not every student feels prepared to follow those commands.

"We don't really have practices to know if something like that happens, what to do," said Jasmine Watford, an NCSU senior. "I feel like people would panic."

"Is anybody ever ready for that?" said Chris McBennett, an NCSU student. "They could put all the systems they want into place -- and I don't think this is the university's fault or anything -- but nobody's really ready for an active shooter."

Randy Young, with UNC Department of Public Safety Media Relations sent the following statement to ABC11 on Tuesday, saying an emergency responders group is now reviewing best practices in light of the attack in Ohio:

"A common message to "Get out-Hide Out-Fight it Out" (or similar messaging) is integral to training-including a video presentation-we provide to the UNC campus community related to best practices in the event of an armed-and-dangerous person in the area, and it figures prominently in the information on our Alert Carolina website. Additionally, our emergency communications (i.e., texts, social media) include the language to "seek shelter immediately" and await updates on the Alert Carolina website. We constantly review our Alert Carolina system such that it communicates the safest actions to take in any emergency in the quickest and clearest manner."

DUKE'S GUIDE ON WHAT TO DO IN AN ACTIVE SHOOTER SITUATION

At Duke, administrators said a reminder to review the training video coincides with the university's test of its alert system every semester. Kyle Cavanaugh, Emergency Coordinator, said in a statement:

"First, our thoughts and prayers are with the Ohio State community and those injured in yesterday's attack. Unfortunately, as we see too often, Universities and Health Systems are not immune from such horrific events. While our hope is to be able to identify warning signs and prevent potential violence before it happens, we must also be prepared for the worst.

"At Duke, we continue to constantly evolve our safety efforts and training, including videos and facilitated programs designed to help students, faculty, and staff understand how best to respond if ever confronted with an active shooter situation on campus. While we hope never to be faced with such a situation, it is important for people to know their options for how best to respond if they are."