ACC Basketball Media Day: Duke, UNC will be in hot pursuit of Virginia 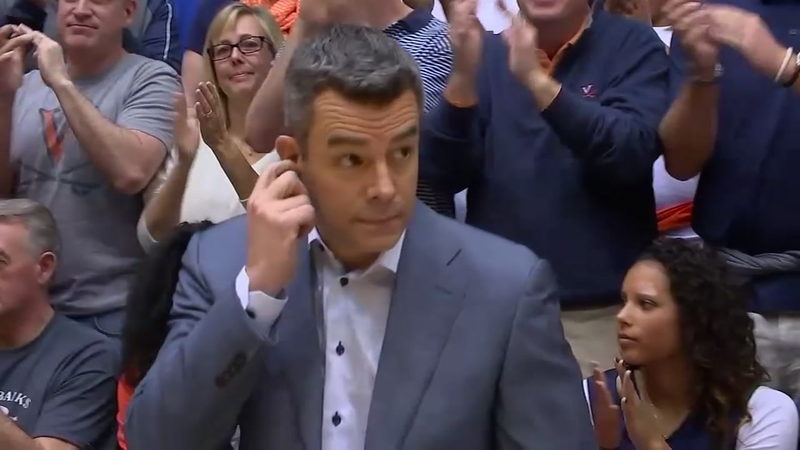 CHARLOTTE, N.C (WTVD) -- Virginia made history last year thanks to the 20-point drubbing they took at the hands of 16th-seeded UMBC in the NCAA tournament.

While that loss was the most humiliating in tournament history, it certainly doesn't negate what the Cavaliers accomplished during the rest of the year. 19-1 in ACC play overall, with their one loss being a one-point defeat in OT vs Virginia Tech. Regular season and ACC Tournament champs.

That's why I have them ranked No. 1 in my preseason ballot. Kyle Guy, Ty Jerome, DeAndre Hunter and crew figure to be merciless again.

That said - it's obviously far from a sure thing with the likes of Duke and Carolina lurking. The Blue Devils have the most talent in the league with their latest wave of super freshmen. Having Tre Jones around to facilitate the likes of RJ Barrett, Zion Williamson and Cam Reddish only makes them scarier.

Williamson continues to dominate the conversation. Mike Krzyzewski called him the greatest athlete he's ever coached while teammate Jack White raved about his passing ability and basketball savvy. Zion, said K, is already such a star that he goes by just one name - "and he can back it up."

K on guilty verdicts : “those who break rules should be held accountable.” pic.twitter.com/vJLvUphVbZ

It's where to go from here that he struggles with. Absent any kind of leadership structure for college basketball, Krzyzewski isn't sure what steps will be taken next. He did volunteer himself for any committee that could be formed to tackle the issues.

Not the first time - but K is holding court here expressing at great length his frustrations at the leadership and structural void in CBB and how it impacts every issue involving the sport. You can tell he needs to vent. pic.twitter.com/eZV9S73xp9

Roy Williams is confident he's got another really good team on his hands, with several "ifs" involved. IF he can get a big man to step up and make the post his own, IF his teams work hard enough and IF they can be consistent.

Williams did tell one reporter that freshman PG Coby White runs the team with speed the likes of which he hasn't seen since Ty Lawson.

Perhaps the greatest out of context Roy Williams snippet of all time pic.twitter.com/Q831ASo5m2

That's a mighty comparison that Roy certainly wouldn't make lightly and maybe an indication that White has edged ahead of Seventh Woods in the race to start at that spot.

These mannequins are freaking units. The calves pic.twitter.com/utCDCwWjqa

Kevin Keatts says he feels like he's starting over again this season what with the multitude of new faces that'll take the court. He got some of his winning culture installed last year, now it's time to continue the process of making the team play in the manner he wants. Namely, with plenty of speed and plenty of pressure.

My Preseason All-ACC ballot. A reminder - I’ve correctly picked the exact order of finish of every team for the last 11 years.****

Both Torin Dorn and CJ Bryce said that suffocating pressure defense will be the calling card of this year's Pack team.

They've got a bottomless vat of guards and wingmen to turn to to make that happen.

Per @TheRealJaiKumar’s request - a close up of the State unis here pic.twitter.com/hatiAeZEn6