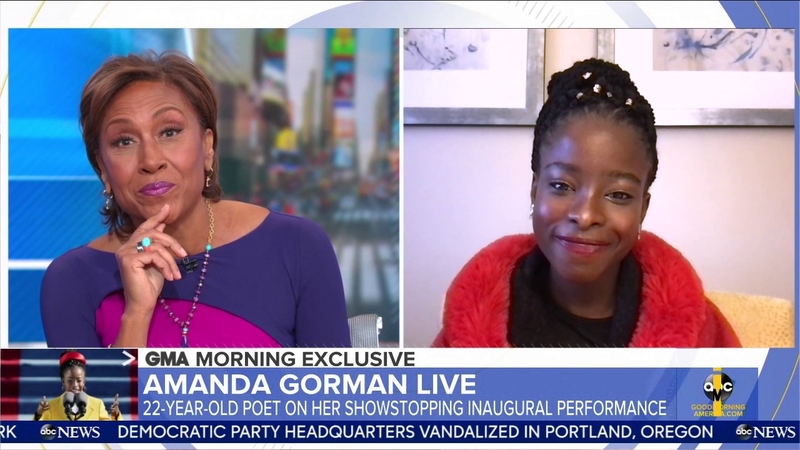 NEW YORK -- The day after inaugural poet Amanda Gorman awestruck the nation with words of devastation and triumph, the 22-year-old writer and activist said she feels "amazing."

"It's not often that you wake up on a morning feeling like this," Gorman told Robin Roberts on "Good Morning America" Thursday morning.

She went on to say that she was "shocked" and "overjoyed" by Dr. Jill Biden's inaugural invitation last month. She is the youngest by far of the poets who have read at presidential inaugurations since Kennedy invited Robert Frost in 1961, with other predecessors including Maya Angelou and Elizabeth Alexander.

"I was not expecting that at 22, they would trust me with such an honor," she said. "I was also daunted at the same time. I was honestly scared of writing such a poem. I wasn't sure if I could do it justice, but I'm so glad that I put my best foot forward and did it."

Her poem, "The Hill We Climb," referenced everything from Biblical scripture to "Hamilton." Gorman, a native and resident of Los Angeles and the country's first National Youth Poet Laureate, told The Associated Press last week that she planned to combine a message of hope for President Joseph Biden's inaugural without ignoring "the evidence of discord and division."

Inaugural poet Amanda Gorman summoned images dire and triumphant as she called out to the world "even as we grieved, we grew."

She had completed a little more than half of "The Hill We Climb" before Jan. 6 and the siege of the U.S. Capitol by supporters of then-President Donald Trump.

Able to walk through her fear, Gorman delivered a showstopping performance that was met with widespread praise from former President Barack Obama to Oprah Winfrey.

"Hamilton" creator Lin-Manuel Miranda, another fan of Gorman's work, also shared words of appreciation in an inspiring personal message that Gorman watched for the first time on "GMA."

"The right words in the right order can change the world, and you proved that yesterday with your brilliant piece. I'm so incredibly proud of you and I can't wait to see what you write next. Keep changing the world, one word at a time. You smashed it!" he said.

"I almost fell out of my chair!" Gorman said after watching. "That was amazing!"

While on GMA, Gorman also revealed that she--like Joe Biden--grew up with a speech impediment. She said she could not say several letters until she was around 20 years old.

"Most specifically the R-sound...meaning that I couldn't say words like 'poetry' or even 'Gorman' which is my last name, and I had to really work at it and practice to get to where I am today."