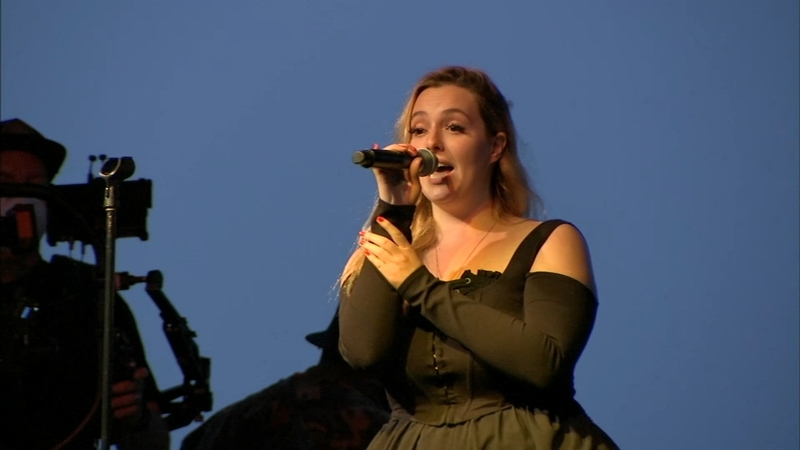 Kinstler is in the final three for the big finale this Sunday on ABC. Grace impressed the judges last Sunday with a cover of Kelly Clarkson's "A Moment Like This."

"It's absolutely crazy. I can't believe this many people are here," Kinstler said. "I just feel so grateful, I'm just so excited to be here right now."

Kinstler, 20, was welcomed back with a parade overflowing with fans lined up for blocks, followed by a special award from both Crystal Lake and her hometown of Lakewood.

"American Idol" finalist Grace Kinstler returned home to Illinois for a special celebration in her honor in Crystal Lake and Lakewood.

The American Idol finalist slayed the stage Sunday night, once again bringing the some of the music industry's greatest to the feet in awe and admiration.

"I remember my first audition. I was so, so, so nervous just to be in the same room with them," she said.

Days from now, the show will crown a new winner. But for Grace, simply making it this far has been a dream come true.

"'Idol' has made realize that I'm able to change people's lives," Kinstler said. "Just the amount of people that have reached out to me and said, 'You inspire my daughter, you inspire me and I'm 60 years old to have more confidence in my body and myself.' That's everything, that's all I could ever ask for."

Kinstler took the stage once more time before the show's finale for a special hometown performance. She said this was a moment her late father, an inspiration for many of her performances, would be proud of.

"He would say, 'I told you. I told you' because that was just him," Kinstler said. "I miss him, but I keep him with me and he would just be so, so happy-he'd be crying."

And to the hundreds that stood out in the rain just for her, as well as her countless other fans:

"Thank you so, so very much. I appreciate you more than you'll ever know and this is, this is so cool and I'm just so grateful," she said.

'She had an energy and a spark': HS choir teacher recalls American Idol star Grace Kinstler

Kim Scherrer, Grace Kinstler's mentor and former choir teacher, recalls what the American Idol star was like back in high school.

Kinstler graduated from Crystal Lake Central High School in 2018. Kim Scherrer, Kinstler's former choir teacher, said she "controlled the room" whenever she was in a performance or audition.

"She had an energy and a spark that is definitely a unique characteristic," Scherrer said.

Scherrer said Grace first gained notice at Crystal Lake Central taking on the role of Ursula in "The Little Mermaid."

"She was stunning - and that was as a sophomore," Scherrer said. "So to command a role like that at that age, you walk in pretty stunning."

Later she often chose to forego auditions for solos to give others a chance, and she became a guiding light in the choir's mentoring program.

"Just watching her work with a diverse group of students, and pulling back in her own voice and her own needs so that others can shine," Scherrer said. "That is what Grace is all about and that is why our community loves her so much."

When it came to singing as part of a choir, Scherrer said Kinstler was very unassuming.

"She is one of the humblest, kindest students we have had through our doors," Scherrer said. "You would never know talking to her that she's had the kind of success she's had. She rarely talks about herself."

Scherrer said the whole area is excited to cheer her on.

"This has been just fantastic," she said. "We are so excited and so thrilled to cheer Grace on. I cannot think of a more deserving person to have this honor, and her Tiger Pride family here in Crystal Lake is just loving watching her in the spotlight."

Crystal Lake was buzzing ahead of a big homecoming celebration for 'American Idol' star Grace Kinstler.

Jennifer Martin, who said she has watched every season of the show, drove over an hour from Aurora to celebrate "Amazing Grace."

"I think she is a beautiful voice, a beautiful person, can sing, like they say, the phone book," Martin said. "A Kelly Clarkson in the making."

Some kids were taken out of school to be present.

"My family watches 'American Idol' every year and we haven't went to a parade for someone that is from our town," said Haylee Hett, 10.

Haylee's mom Nicole said Grace embodies self-love: "Just be you. Don't worry about what other people say, and just be you."

For more information on the celebration, visit the city of Crystal Lake's website.