Apex couple donating thousands of airline miles to help Ukrainians get to the U.S. 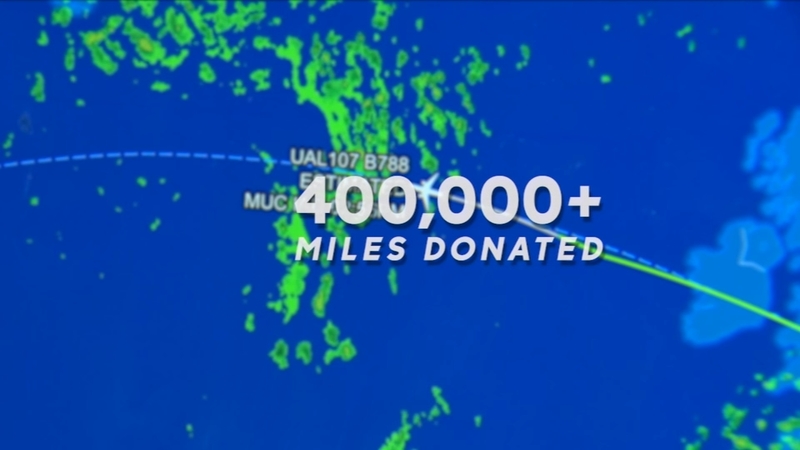 APEX, N.C. (WTVD) -- An Apex couple is helping in the humanitarian crisis happening in Ukraine. They're donating thousands of airline miles to get those desperate to get out of harm's way to the United States.

"I got families flying over the Atlantic, on the way to safety, that is priceless," said MG, who asked us not to use his last name for privacy reasons.

On Tuesday he had been watching a flight that left Warsaw, Poland, and is headed here to the US. On the flight are a mom and her two children who were living in Ukraine.

MG, a successful businessman, made this flight possible by using his good fortune to fly those who fled Ukraine to neighboring countries to family here in the U.S.

"After watching what's going on and witnessing the hardships that are taking place, this is not something we can just watch and move on in our normal life," he said.

In their normal lives, MG and his wife, Dawnna, are well known for opening the gates to their Apex home each year for the Christmas Lights on Holt Road. He has such a large social media following that when the crisis unfolded in Ukraine, he turned to his followers and asked whether anyone needed help getting their loved ones to safety.

Dawnna said, "It's just heartbreaking to see the fear. Let's just say that they might be safe where they currently are, but they're fearful of what could be coming in their direction."

MG flies weekly for business and has hundreds of thousands of frequent-flier miles. Flights out of Poland are about $1,800 right now, but with MG's airline miles, just 36,000 miles.

"So basically, those miles can be a lifeline to families who are in desperate need," MG said.

MG said he understands their fears as while he has wealth now, he grew up poor, and lived through unrest.

"I'm coming from El Salvador, which was a country that was absolutely destroyed by wars back in the early '80s, but I know what it's like to have bombs going off," he said.

Now he and his wife refuse to just sit and watch the heartbreak happening in Ukraine. So far, they have donated more than 400,000 United Airline miles to get families to safety.

"As a mom, you want to hug and protect and so fortunately we have this that we can say here," Dawnna said. "This is our hug for lack of a better word."

MG added: "I just wish I could do more."

So far, MG and Dawnna have been able to book several flights for families fleeing Ukraine to get to their loved ones.

"I have people flying to RDU, New York, Chicago, Minneapolis, in Tacoma, Washington. So those are the people that are moving this week," MG said. "We also have several families right now in the work, you know, trying to get organized make sure that they have proper documentation. "I also want to emphasize that these miles we want for them to be preserved just for the people that absolutely do not have the means to buy their own tickets."
MG is challenging others in his situation to offer the same help.

It's working, as MG is already getting offers from others to donate miles; two different people have donated a total of 500,000 airline miles, which is helping several families to get here to family.

MG and Dawnna said they are amazed at how quickly they have been able to get help to the people in need.