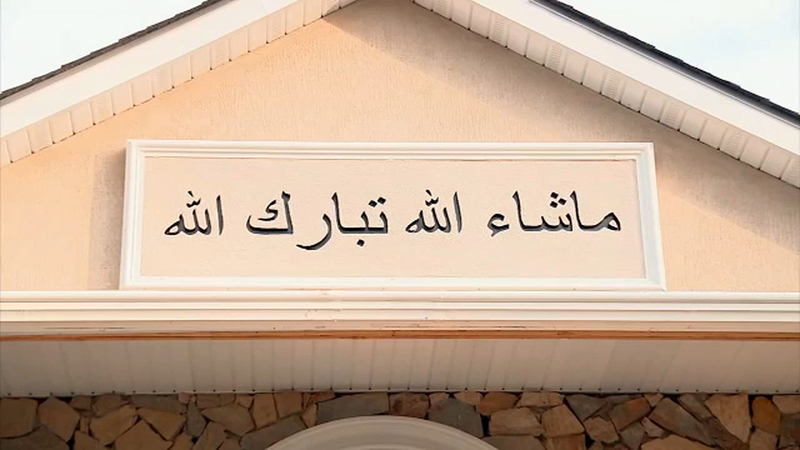 WAYNE, N.J. -- A sign on a home getting remodeled has sparked a controversy in one New Jersey community.

The sign on the house in Packanack Lake in Wayne reads in Arabic: "What God has willed. God bless."

But if the sign struck a nerve, the flier has also brought strong condemnation from many residents.

"I think there is a kind of racism in here," one resident said.

"It's un-American to treat people like this," another resident said.

"The only people that are not welcome here are the people who wrote that letter," resident Linda Cattuna said.

Jose Rosario made the sign as a surprise gift to the homeowner, who is still waiting to move in to the house.

He is the contractor, a US Army veteran.

"The only thing I do is look back and see the flag hanging there, proud as it can be, and somebody with that kind of hate," Rosario said. "It's pretty emotional."

"I just want to come to see what they say," homeowner Dr. Mahmoud Elsanaa said. "That's all."

Elsanaa, at a neighborhood meeting Wednesday night, said he just wants this all to go away. But some don't want that.

"It's just that it seems un-American to me," resident Judy Jack said. "A sign that is written that big in a foreign language? That's all."

Residents admit that some are uncomfortable with the sign, but they insist it is a very small minority.

"There's going to be a small element of people that are afraid and intimidated by what they don't understand," resident Mike Lamb said.

The longtime Republican mayor got the flier in the mail, with no return address. He calls it disgusting.