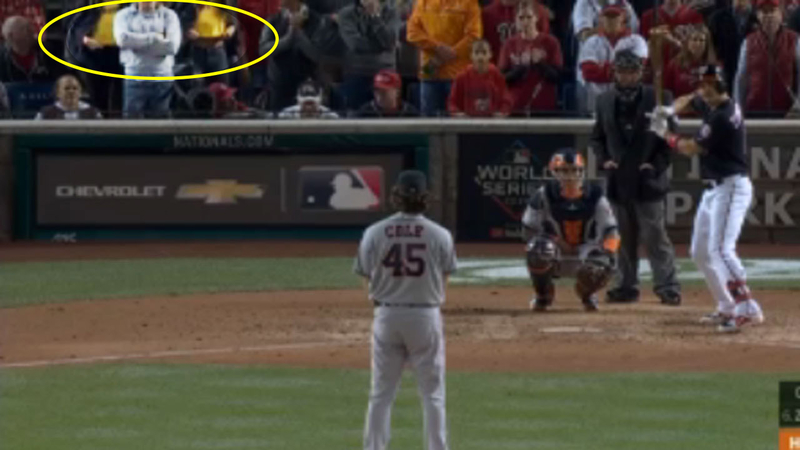 WASHINGTON, D.C. -- Three women behind home plate are getting widespread attention after they flashed Houston Astros pitcher Gerrit Cole during Game 5 of the World Series Sunday night in Washington, D.C.

The incident happened during the bottom of the 7th inning at Nationals Park, when the Nats' Ryan Zimmerman was at bat.

A woman who goes by the handle JuliaRose_33 on Twitter said she and a second woman were banned by Major League Baseball for the incident.

She shared a photo of what appeared to be a letter from David L. Thomas, Vice President of Security & Ballpark Operations at MLB.

"During the game, you violated the fan code of conduct by exposing yourself during the 7th inning, in order to promote a business. You were also part of a scheme in which you induced others to expose themselves to promote the business," the letter read.

"You are hereby banned from all Major League Baseball stadiums and facilities, indefinitely," the message, which appeared to be signed by Thomas, continued.

The second woman, Lauren Summer, said in response to one media outlet that there was actually a third woman named Kayla Lauren involved in the incident.

Some online users are coming to the women's defense, saying that the league shouldn't ban them because they were trying to raise awareness for breast cancer.

The women spoke to ABC13 saying that they pulled the incident to raise awareness for breast cancer.