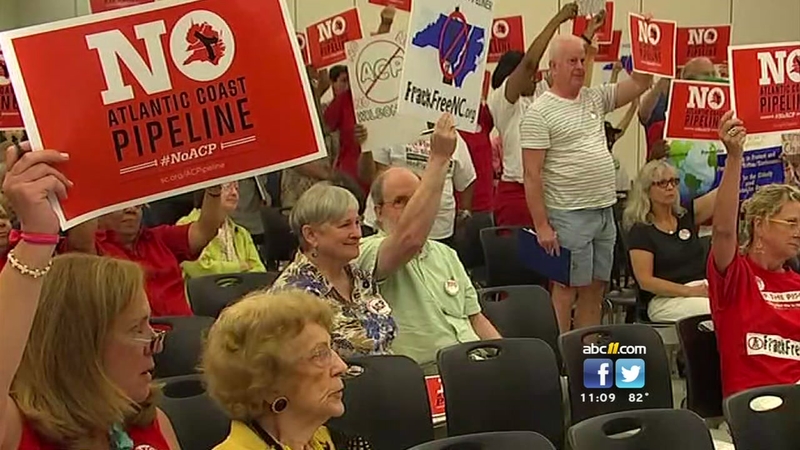 ROCKY MOUNT, North Carolina (WTVD) -- In a high stakes meeting about the future of powering our homes, a packed house of residents sure brought the heat.

The Department of Environmental Quality on Thursday hosted its final public hearing on the proposed Atlantic Coast Pipeline, the $4.5 billion project touted by Duke Energy as the best way to increase natural gas supply to the booming Piedmont.

"People always ask us about renewable energies - and we investing in that," Duke Energy spokeswoman Tammie McGee told the ABC11 I-Team. "But we have the obligation to (deliver energy) 24 hours a day, so natural gas is a perfect backup when renewables are no available during the night and during the storms."

Duke Energy is one of four major companies behind the project, which also includes Dominion, Piedmont Natural Gas and Southern Natural Gas. The pipeline, as currently designed, would transport natural gas shaled from the Ohio Valley and deliver it to West Virginia, Virginia and North Carolina.

McGee now lives and works in Charlotte far away from the proposed location for the pipeline, but she told ABC11 that she grew up in Rocky Mount and is promising that Duke Energy will protect the area's wellbeing.

"Pipelines are the safest way to transport natural gas," McGee said. "The technology is only getting better through the years."

Indeed, pipelines have emerged as an increasingly reliable mode of transporting oil and natural gas. Federal records show as many as 300,000 miles of natural gas pipelines already in the United States.

Still, while incidents are rare, they are very costly when they occur. According to the U.S. Department of Transportation, 38 pipeline incidents in 2016 killed 16 and injured 83 people. In the past 20 years, the DOT's Pipeline and Hazardous Materials Safety Administration counted 5,681 incidents, resulting in 310 deaths, 1,302 injuries, and $7.8 billion in property damage.

The incidents range from fires, explosions and "volatile liquid" leaks.

"Naturally, if there was an explosion or something like that, there won't be much left," Wilson County resident Ron Bunn told ABC11.

The proposed route would take the pipeline less than 1,000 feet from Bunn's home in the western part of the county.

The Atlantic Coast Pipeline has already passed a number of bureaucratic steps, especially on the federal level. The Federal Energy Regulatory Commission (FERC) is expected to give its final approval this month.

On the state level, DEQ officials must evaluate how the pipeline and construction would affect waterways, including streams, rivers and basins.

A DEQ spokesman said the department would give its decision in September, and public comment via email is welcome until August 19.