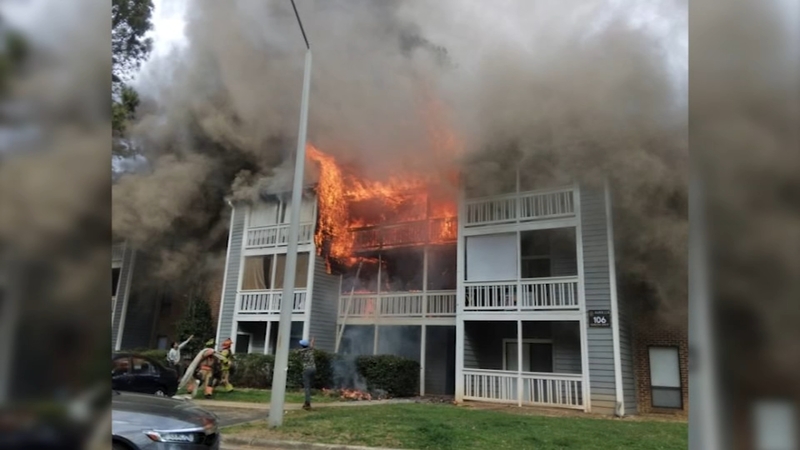 CARY, N.C. (WTVD) -- Investigators continue to investigate the cause of a deadly apartment fire that left a child dead, several others injured and dozens displaced.

"Let's just say it looked like hell opened up," said one tenant, Chris Fetscher. "The fire was huge, engulfed. You could feel it."

On Tuesday, Town of Cary officials confirmed that a 9-month-old infant died from injuries suffered in the blaze.

A 28-year-old woman remained in the hospital in critical but stable condition.

Two others, a 21-year-old man and a 70-year-old woman, suffered what were described as non-life-threatening injuries.

The fire started Monday afternoon at the Aurella Cary apartments on Harlon Drive and spread quickly.

As the investigation continues, people living near the gutted building want action.

"There's been a lot of issues with electricity. Things blinking on and off, stuff like that," said Jenn Peltier. "I feel like that could be something."

Peltier is a displaced tenant and said she has tried to let the complex's owners know about potential hazards.

"Sending emails, sending videos, going up and up. And no one's ever done anything about it," Peltier said.

There are at least 12 apartments damaged or ruined.

"We are hoping to get out of our lease and find someplace new," Fetscher said. "That's what my goal is, to do after this is all over."

Fetscher said he didn't know the family whose child died in the fire but knew they lived above him.

"They lived on the third floor where most of the fire, it looked like it was," he said. "And then I had people under them that lived above me."

Those living nearby anxiously await to hear why the fire started.

"Let the community know what's going on, what started the fire," said tenant Lakesha Monroe. "Are there any protocols we can take that would prevent something like this?"

"At this tragic time, we are focused on the safety, comfort and privacy of our residents," Harbor Group Management said, in part. "Those impacted by the fire have been given lodging and we are doing our best to support the fire department as the cause of the fire is investigated. We would like to express our appreciation to the fire department and the first responders who worked so hard to put out the fire and tend to everyone on the scene."
Report a correction or typo
Related topics:
carychild deathbaby deathdeadly fireapartment firefirefightersinfant deaths
Copyright © 2022 WTVD-TV. All Rights Reserved.
TOP STORIES
Official says police made 'wrong decision' during TX shooting
Severe weather risk remains high, potential for flash flooding
Massacre survivor says gunman told them: 'You're all gonna die'
Bank employees help kidnapped woman after she asks for loan
Yankees and Rays share gun violence facts instead of game coverage
Meghan Markle pays respect to Texas school shooting victims
Police chase creates traffic delays on I-40 heading into Raleigh
Show More
NRA opens gun convention in Texas after school massacre
8 of 10 largest cities lost population during 1st year of pandemic
Local families, leaders hold vigil for school massacre victims
Hurricanes win Game 5, push Rangers to brink of elimination
$1.3M Raleigh home listed on Zillow for $17,000 in latest scam
More TOP STORIES News