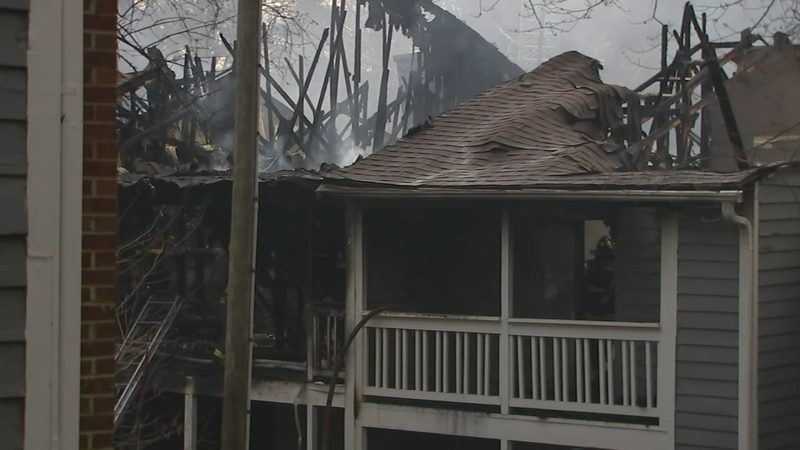 CARY, N.C. (WTVD) -- A child died from injuries sustained in an apartment fire in Cary on Monday afternoon.

The deadly fire happened in the 100 block of Harlon Drive in a three-story apartment building at the Aurella Cary apartments, formerly known as Misty Woods Apartments.

Flames and smoke could be seen coming through the damaged roof of a third-story unit. The roof has since collapsed.

Closer look at the damage done by this fire at a @TownofCary apartment complex this afternoon. One woman said two cats are still inside 🙏 #abc11 pic.twitter.com/OzNCclZUEX

A Cary Public Safety spokesperson told ABC11 on Monday night that a child succumbed to injuries from the fire.

At least two people were taken out on stretchers. Three had to be rescued from the heavy flames. Four people, including the child who did not survive, went to the hospital.

The extent of any injuries is not yet known. The child's age has not been released.

Crews from multiple departments responded to the scene.

One resident, Chris Fetscher, was off for the day and said he was relaxing on his couch.

Fetscher, who delivers beer and wine across the state said that when he opened his door, he saw smoke coming down, balls of fire, and pieces of wood flying down from the top floor.

"I had to put out a little fire that was blocking my door because I couldn't get out at first. I took a pot, filled it up with water, ran out, threw the pot on top of the fire, and just ran right out to the street," Fetscher said. "It's scary. I did not expect that on my day off."

Authorities told ABC11 that the fire was under control later in the afternoon, but damage to the units is extensive.

"I know a lot of people in there -- every one of my neighbors," Fetscher said. "I'm heartbroken, upset. I probably only have water damage from everything but everybody else including the third and second floor got the full force of it."

Many residents talked about issues they have had at the units including a fire last month and other electrical problems.

"The top apartment floor was barrelling smoke up," said Jen Peltier, who lives in a nearby building, "So, I mean, it had to have started pretty fast because there was no warning, like for my side, at least."

In all, 28 units were affected. The Red Cross is working with some of the residents to assist them with shelter.

In a bit of good news, two pet cats who were missing during the fire were found safe. A dog was rescued from a closet, too.

🙏 🙏 one of Brittany’s cats has been found! Firefighters are still looking for the other named Coco #abc11 pic.twitter.com/T9JcFDuDIq

Brittany Shytles, who works at Hendrick Auto in Apex, said she got a call from her 15-year-old son, who was panicked because he had just gotten home from school.

We can report thankfully the other cat coco has been found 😮‍💨 #abc11 pic.twitter.com/wcWgkyEuJw

She did eventually find her cats, Coco and Tigger. Shytles said she will be moving out, but in the meantime, Hendrick is assisting her.

"It hasn't hit me yet, but the thought of one fire not even a month ago and a second fire in the building right next to it -- less than a month later, It's mind-blowing," Shytles said.