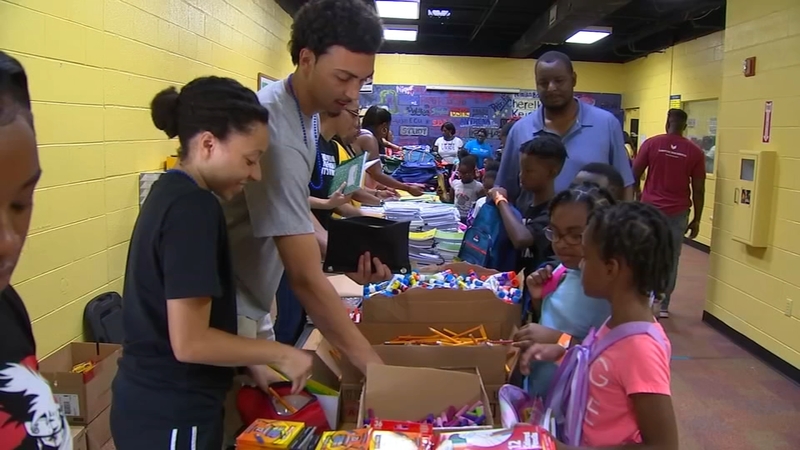 Event helps kids get ready for back to school

RALEIGH, N.C. (WTVD) -- With summer vacations winding down in Raleigh, hundreds of children received reasons to smile during Back to School Community Day.

North Carolina Central University men's basketball coach LeVelle Moton, cohost of the annual celebration with P.J. Tucker, said "It's our 10th year doing it. So it's always been great weather. Hot, yeah, but I'm not going to complain."

Pastor Jerome Gay works with both men, alumni of the Boys and Girls Club in Raleigh. Gay said the concept started "In the community of Washington Terrace. We gave out about a hundred book bags, we just walked through the neighborhood."

One decade later, as word spread of something special for the first 500 kids who arrived, "There were literally more than 300 people here before 9 o'clock," Gay said. "The event didn't start until 11 o'clock. So like I said, we have a thousand book bags. We're sure that's going to run out and we'll be able to serve well over a thousand people this year."

Moton recalled being on the receiving end of such generosity.

LeVelle Moton reflects on upbringing, giving back to kids in need

"I was once in that line." Moton said. "And I knew the difficulties of a child that's associated with going back to school. My mother had two kids. A haircut back in the day was $25 for the both of us, and she probably couldn't afford that at that time along with school supplies. So we had to wait, to break it up, put things on layaway."

Not a problem, on this day, with haircuts and other services provided for free.

They also served free hot dogs and snowballs to the kids. But confidence may be the coolest thing provided, helping the kids see themselves in a positive light as members of their own team. It's a reminder that positive play and encouragement from people who care can make a difference in young lives