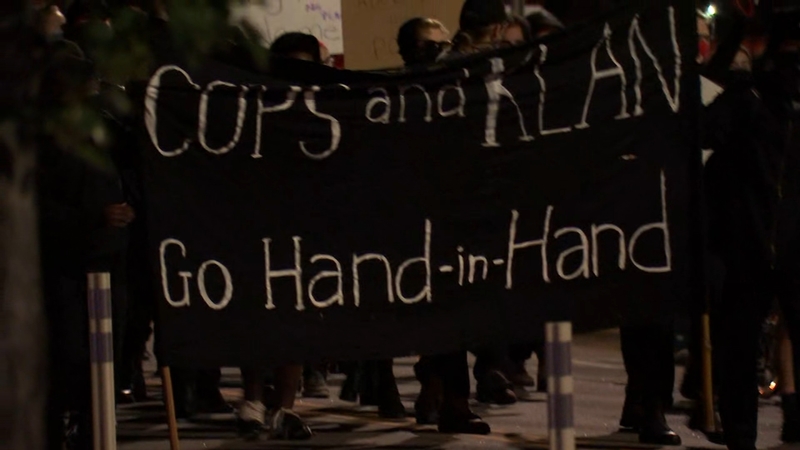 DURHAM, N.C. (WTVD) -- A small group gathered in the heart of downtown Durham on Wednesday night in response to a grand jury's decision to not indict police officers on criminal charges in relation to the death of Breonna Taylor, a Black woman who was fatally shot by Louisville police in her home.

A Twitter group, DurhamBurn, released a flier shortly after the indictment against fired Louisville-Metro police officer Brett Hankison -- who did not fire the fatal shot that killed Taylor. The flier reads in part, "JUSTICE FOR BREONNA TAYLOR | NO GOOD COPS - NO BAD PROTESTORS - NO MEGAPHONES"

Hankison was charged with three counts of wanton endangerment for firing 10 shots into Taylor's neighbors' home during the raid on the night of March 13. The FBI is still investigating potential violations of federal law in the case.

Durham police told ABC11 that there were 13 confirmed vandalism reports overnight. Windows at police headquarters had "revenge" and "burn it down" messages spraypainted on them. Several businesses had shattered windows and trash cans were scattered across some streets.

So far, no charges have been filed.

An ABC11 breaking news crew estimated about 50 people showed up to the march. One self-described group of anarchists involved, called the Underground Resistance Network threw rocks and spray-painted buildings.

Durham activist, Paul Scott, a loud voice in Durham's Black nationalist community, condemned the violence of the night saying that the largely White group hijacked the Taylor tragedy to settle political scores with the White House.

"There has been a history in this country of White anarchists manipulating Black suffering," Scott said. "In this country right now, courtesy of the man in the White House, there is a civil war going on between White people and they're using Black people as political pawns."

Since the decision, supporters across the nation have taken to both the streets and social media expressing their discontent with the indictment.

Earlier this month, a protest was held in Durham in response to a case of mistaken-identity that led to officers drawing guns on three boys who were playing tag outside their home.