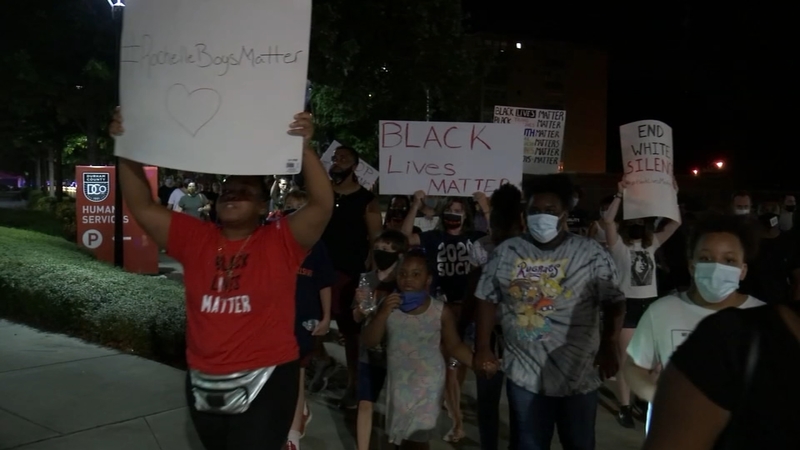 DURHAM, N.C. (WTVD) -- Demonstrators gathered outside Durham City Hall on Friday night in protest of Durham PD's mistaken-identity incident that led to officers drawing guns on three boys who were playing tag outside their home.

From Mangum Street to Pettigrew and back on to Main Street, they marched through downtown Durham demanding justice for the three boys that they say were criminalized and traumatized by city police officers.

The controversy began in East Durham on August 21. Durham Police officers responded to the Rochelle Manor Apartments about a report of a suspicious man with a gun. What they found were three children. A 15, 11, and 9-year old boy playing tag.

In eyewitness video recorded by a neighbor, the officers are seen with their weapons holstered after initially arriving with the guns drawn. They ordered 15-year old Jaylin Harris to the ground, handcuffing him -- before realizing they'd made a mistake. His young friends looked on in horror and their parents arrived in outrage.

"It's scary like -- I shouldn't know what handcuffs feel like," Jaylin told ABC11 in the days after the incident. "Now that I do. It's not a good feeling."

Demonstrators encouraged those gathered to call their city council members to continue to demand justice.

"Thank you to everybody for coming out here and standing and listening to us," said 9-year old Zakaryya Cornelius, who watched as his friend was handcuffed by police that day.

His mother, Makeba Hoffler, told the crowd of about 200, "Our kids should not be targeted because of the color of their skin or where they grew up or where they live."

His mother, Ashley, was grateful for the community support.

Demonstrators gathered Friday to demand justice after DPD officers pointed their guns at three children playing outside their home.

"it's a nightmare, and I'm just in awe at all the support and the love that we've been receiving," she said. "That's the only kind of peace we're getting right now."

The protests' grassroots organizers want DPD to release the officer body cam video, the 911 call and demand an overhaul of the city's community policing strategy.

Demonstrators are marching through downtown Durham to demand justice for 15-year-old Jaylin, who was handcuffed while playing outside his home.

"There's just never an instance where officers should come guns drawn to these children. Black children should feel safe to play outside their homes," said Sarah Hinton, one of the march organizers.

10-year-old Daliyah Pemberton sat listening attentively to the demonstration with a purple handwritten sign that read, 'No Justice, No Peace, No Racist Police.' She was asked by ABC11 what she wanted to happen because of the protest.

Cell phone footage captured the moment when Durham Police Department handcuffed a 15-year-old playing in his front yard in a case of mistaken identities.

"I want (police) to apologize and change the ways that they've been behaving," the fifth-grader said.

15-year-old Jaylin was handcuffed outside his home while he was playing with two other kids.

That is not good enough for the families or many in the community who are demanding more transparency, starting with the body cam videos and the 911 call.