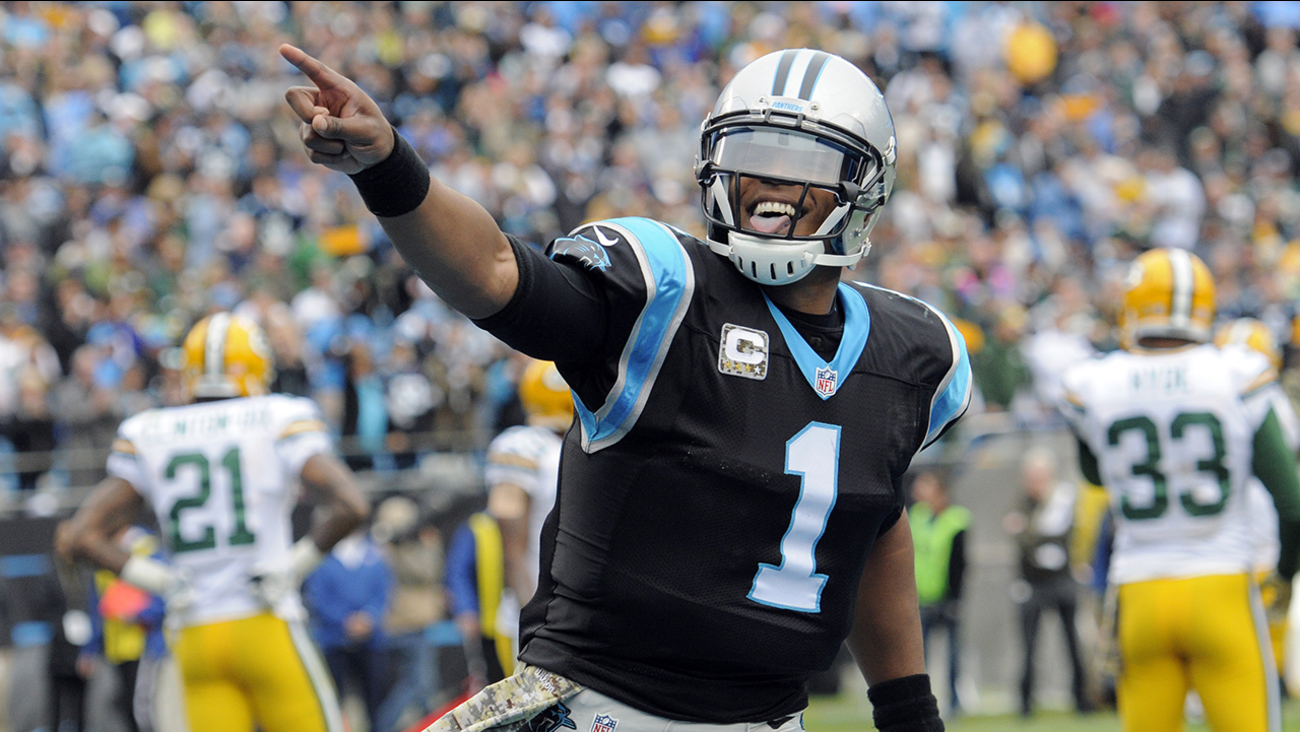 CHARLOTTE -- The Carolina Panthers said they would prefer not to go Lambeau Field in the NFC playoffs.

Cam Newton threw three touchdown passes and ran for another score, and the Panthers took an important step toward securing home-field advantage throughout the NFC playoffs with a 37-29 win over the Packers.

Newton completed 15 of 30 passes for 297 yards and ran for 57 yards on nine carries in one of the better games of his five-year NFL career.

The Panthers (8-0) extended their regular-season win streak to 12 and put themselves in terrific shape in the NFC standings, where every other team has at least two losses.

Aaron Rodgers threw for 369 yards and four touchdowns and led a furious fourth-quarter comeback from 23 points down, but couldn't complete it. Linebacker Thomas Davis intercepted Rodgers on a fourth-and-goal pass at the Carolina 3 with 1:54 left.

It was a frustrating day all around for the Packers, which led to some infighting on the sideline.

In the fourth quarter, Ha Ha Clinton-Dix began jawing at Julius Peppers, who was seated on the bench. Peppers stood up and B.J. Raji stepped in, shoving Clinton-Dix backward.

Earlier in the game, Peppers came up with a loose ball after Newton leaped into the end zone for a TD run and threw the ball downfield after the quarterback asked for the ball back. Newton retrieved the ball and gave it to a fan.

The dual-threat quarterback was dominant in the first half, throwing for 209 yards and two touchdowns and rushing for 37 yards and another score. The Packers opened the game in man coverage and Newton made them pay right away by finding huge holes to run through for big gains.

Newton gave Carolina the lead for good at 10-7 with a 52-yard pass to rookie Devin Funchess to set up a 7-yard TD pass to Greg Olsen. Then he came back with a 39-yard touchdown strike to Philly Brown with 41 seconds left in the half.

He also Newton hooked up with Funchess on a 14-yard pass for a 37-14 lead with 9:22 left. Newton repeatedly went after rookie cornerback Damarious Randall, and the Panthers, despite playing without top defensive end Charles Johnson, kept pressure on Rodgers all day.

The Packers battled back, with Randall Cobb beating Bene Benwikere for a 53-yard touchdown strike one minute into the second half. Rodgers' 29-yard TD pass to James Starks and a 2-point conversion toss to Davante Adams cut the lead to 15.

Then, on fourth-and-14, Rodgers rolled to his left evading three pass rushers and fired over the middle to James Jones for a 36-yard completion to keep Green Bay's hopes alive. Rodgers completed the drive with 3-yard pass to Richard Rodgers, his second touchdown of the game, to cut the lead to 37-29.

On the ensuing possession Randall intercepted Newton near the sideline at the Carolina 22 with 3:38 remaining. But the Packers couldn't convert.