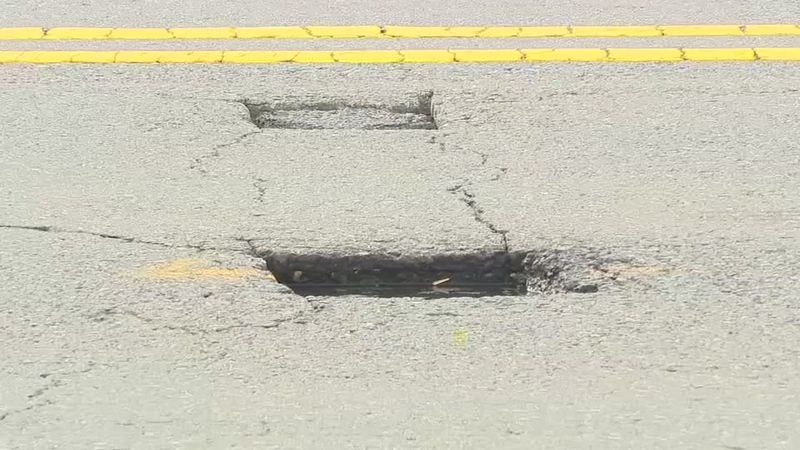 CARY, N.C. (WTVD) -- James Nowell's stepdaughter, Ashley, was driving on Carpenter Upchurch Road in Cary over the weekend when she struck a pothole at the intersection of Louis Stephens Drive.

"Ashley was very lucky. Just damage to the car," Nowell said. "A car we still haven't paid for."

Nowell said his stepdaughter was not on her phone at the time at the accident. He uses an app that monitors her activity. "She wasn't going a high rate of speed," he added. "She was doing everything she was supposed to do as a responsible driver."

This pothole on Carpenter Upchurch Rd in Cary caused a 17-yr-old HS senior to lose control of her car and crash. DOT tells me a utility company did some work and never informed them of it. #ABC11 pic.twitter.com/D7Pnt1NJhu

The 17-year-old Green Hope High School senior did not suffer any injuries; however, she did complain of soreness and headaches through the remainder of the day. "Shook her up," Nowell said. "Scared us."

Nowell told ABC11 he reached out to the Town of Cary to report the problem and they told him the NCDOT is responsible for the maintenance. Records show Nowell alerted the NCDOT of the pothole on Tuesday.

Upon further review, the pothole appeared to be manmade.

ABC11 contacted the DOT and they sent the following response: "That hole was cut by a utility company for some of their work. Unfortunately, we don't know which company made the cut or what specific utility work they were doing because they did not inform our maintenance crews that they were doing something to the roadway. Thanks to your inquiry, however, we now have a crew preparing to head that way and patch up the hole."

Nowell confirmed with ABC11 Wednesday afternoon that the hole had been fixed.

"I don't want to see somebody else hit that (intersection) sign or hit that pole. Or lose control and go off the road. It could be a lot worse," he said.