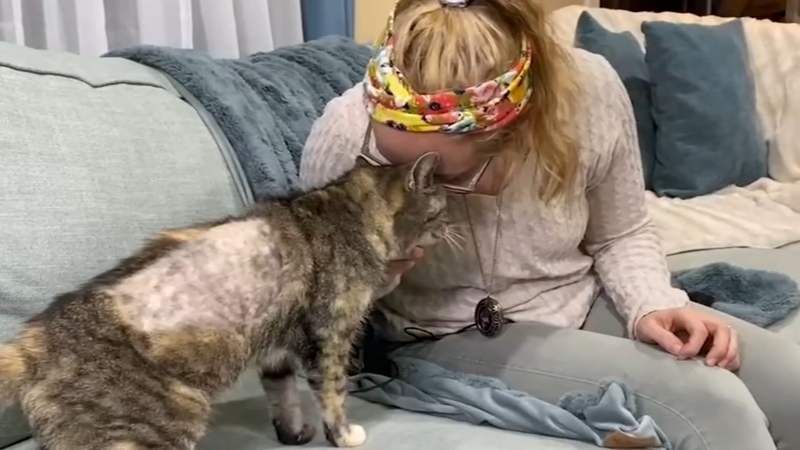 "That was my best friend, and I was just going through a lot at the time already, so it was just, it was just really, really awful and lonely without her," Read said. "We had her and one of the other cats for a really long time since I was 4 years old. She's been my best friend the whole time I grew up."

"She had been with us at the new house for a couple of days, and she kept getting outside and she was moving really slow, and she just seemed like age had gotten to her, and I would grab her and bring her back to the house because she wasn't familiar with the area," Read said. "She had known the other house for 16 whole years and that was her domain. She was the queen bee of that neighborhood. But I kept bringing her back inside when she would run off, and she kept running toward the neighborhood that's behind where my parents live. And, one day I went to work and she got out and she never came back."

To make matters worse, just after Muffin was lost, Hurricane Matthew began bearing down on North Carolina. The Read family searched for their beloved pet for weeks.

"I went out in the pouring rain, calling her name just trying to find her. I was determined to find her," Read said. "We even went to the neighborhood that she was walking toward, and we knocked on doors asking people if they had seen a cat around."

Muffin the cat makes it home to her @TownofFV family after missing for 4 years. The full cat tale at 4:55 on #ABC11 #CatsOfTwitter pic.twitter.com/onNvBPTCmj

Despite their efforts, Muffin was never found but, her owner never gave up hope she was still alive.

"Everyone kept telling me that she ran off, she passed away, that she was so old, and I refused to believe it," Read said.

Four years later, Read received a call that took her breath away.

"My mom called me when I was at my friend's house, waiting for her to get her new puppy, so I was going to get to meet a puppy, and my mom was like, 'we have a surprise, we need to take you somewhere, it's really important.' And I was really anxious, I had no idea what was going on," Read recalled.

"We pulled up to the vet, and I'm just sitting there and no idea why I was there, and then all of a sudden my dad was like, 'they found Muffin!' And I just kind of went into shock for a second. I was. I just couldn't believe it. And then, I just started crying. I couldn't stop crying because I was going to get my baby girl back. My first cat ever. She had so many people waiting there just for her. And, when she came out, I was just amazed. She's my baby."

As it turns out, Muffin was living a few miles away in a neighborhood the Reads had checked after she disappeared. It was the same neighborhood Muffin kept running toward when she got out.

Read said a family who believed she was a stray began to feed her along with others in the neighborhood. Muffin became an outdoor neighborhood cat. When the new family thought Muffin may be having seizures they took her to the vet where her microchip was discovered, leading the vet to call Muffin's family.

Muffin is 20 years old and still has some health problems, but she is doing well back at home with the Reads, and her family is thankful to get more time with her after missing her for four years.

"I'm so thankful for it," Read said. "I'm just so happy because she needs me right now. She's not in the best health but in the almost week that we've had her she's improved immensely so she's still got some fight and her. It just gives us more time to make up for the missed time."