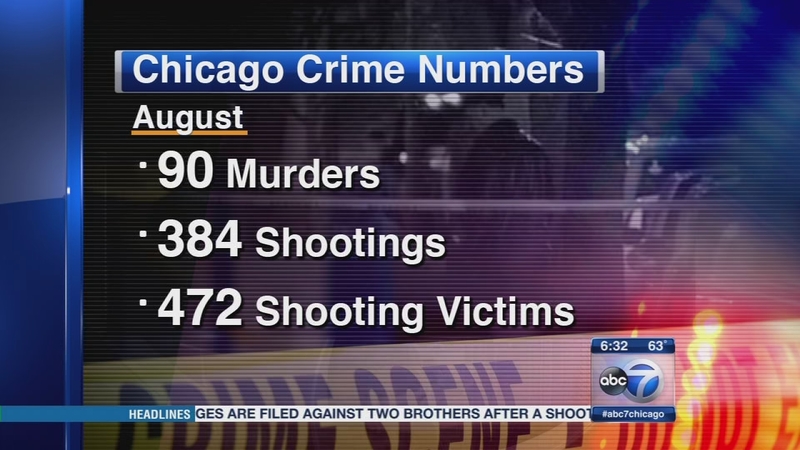 CHICAGO -- Chicago crime numbers released early Thursday morning confirm August 2016 was the deadliest month the city has seen in since 1996.

In the first eight months of 2016, the city tied the total number of murders that occurred in 2015, the Chicago Police Department said.

In August, 90 people were murdered, 384 shootings occurred and 472 people were victims of shootings - including two teens who were shot on Chicago's West Side Wednesday night.

Two 14-year-old boys were shot in the 1000-block of North Menard Avenue in the city's Austin neighborhood around 7:45 p.m. Police said the gunman opened fire from inside a passing vehicle.

Police took 200 violent offenders off the streets last month and illegal gun arrests and homicide arrests were up in August 2016 compared to August 2015, the CPD said.

"There are more murders, but the numbers of arrests that we've made pertain to gun offenses just shows you that the men and women of the CPD are out there engaging these folks. We've recovered one illegal handgun for every hour of the year." Chicago Police Superintendent Eddie Johnson said Thursday.

A majority of these crimes happened within five districts on the South and West sides of the city, but crime rates in other districts are down, police said.

Chicago Police Superintendent Eddie Johnson joined ABC7 News This Morning to discuss what the department plans to do to stop the violence and make the city safer.

Johnson said there is a proliferation of guns on the streets of Chicago and stricter gun legislation is necessary to keep gun offenders from repeating their crimes.

"The police department is doing their part. Where we need help is holding these repeat gun offenders who are driving much of the violence - 1,400 individuals in the city of Chicago - that are driving all the gun violence in our city," Johnson said.

Johnson cited a University of Chicago study of murder cases in 2015 that found 40 percent of the suspects arrested in those homicides had previous gun arrests in their background.

He said this year to date, 85 percent of the non-fatal and fatal shooting victims are on the department's "strategic subject list."

"Those are individuals who are choosing this lifestyle. So most of Chicago is safe from these types of events. Every now and then, we have average citizens that (become victims) of it, (like) Nykea Aldridge from last weekend. Those two brothers that murdered that poor woman. Both on parole - one of them had been out for about 90 days, the other was on home monitoring - and they go out and kill this poor lady. We look at the right people. We just need help holding them accountable," Johnson said.

Johnson said the murder rates in Los Angeles and New York City are lower than in Chicago because those cities have stricter consequences for criminals.

"In LA, they have a law called, 'You Use a Gun and You're Done.' That's what we need here. In New York, they have a mandatory sentencing for the first time you get caught with an illegal weapon: three and a half years. We don't have that here. We need to show the people here that we're serious about this gun violence," Johnson said.

Johnson said he does not think there is a state of emergency in Chicago, because "we know what we need to do we just need to get serious and do it."

Chicago activists are expected to take steps to address the violence plaguing the city.
The Reverend Jesse Jackson, leader of the Rainbow PUSH Coalition plans to announce a series of town hall meetings hosted in high crime areas of the city, which will focus on violence and economic issues. At each meeting, Jackson plans to call on the state and federal government to help stop the shootings.

Chicago activists are expected to take steps to address the violence plaguing the city.

Jackson will make his announcement Thursday at the scene of Elijah Sims' murder.

The Oak Park River Forest High School senior was fatally shot in the head Monday night while hanging out with friends in Austin, where he once lived. Police said the bullet that killed Sims was meant for someone else.

Hundreds of people packed a park in suburban Oak Park to remember Sims, on what would have been his 17th birthday.