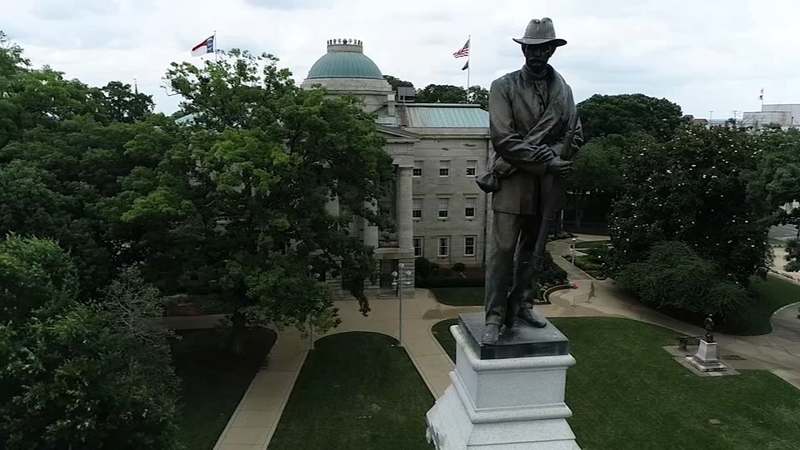 RALEIGH (WTVD) -- Five dozen prominent North Carolina attorneys sent a pointed the letter, Wednesday, to the governor and leaders at the legislature. The message was clear -- Confederate monuments in big important civic spaces must come down. The message was one we've heard before. But this time, the point was argued on constitutional grounds.

When demonstrators took over downtown Raleigh streets in a call for racial justice in the wake of the Minneapolis police killing of George Floyd, the Confederate monuments on the State Capitol grounds became gathering point because of what so many believe they truly are: relics of racism that need to be removed.

"The monuments stand for secession, for slavery, for white supremacy. They can't stand under our state and federal constitution. They need to come down," said Hampton Dellinger who spoke to ABC11 over Zoom along with Nana Asante-Smith. They are two of the 60 North Carolina lawyers who signed the letter to Governor Roy Cooper, House Speaker Tim Moore and Senate Leader Phil Berger.

The attorneys made the case that the monuments' existence on government lands violates Black Americans' constitutional right to equal protection under the law. In this case, the lawyers say it's protection from a racially-hostile environment.

"Because having monuments like this towering over us in areas of such prominence is a reflection of our society and community not being fully or wholly committed to rectifying and making amends for the centuries of harm and terror that has been inflicted upon black people in this country," Asante-Smith said.

North Carolina sent more men to fight in the Confederate Army than any other southern state -- over 130,000. And defenders of the monuments, many of which were built decades after the end of the Civil War, insist they stand as symbols of heritage not hate.

But after a 2015 state law barred cities and towns from removing the monuments on their own, opponents began to take matters into their own hands: toppling "Silent Sam at UNC-Chapel Hill along with a similar fate for the Confederate statue outside the old Durham County Courthouse.

Still, over 100 memorials or statues to the Confederacy remain across the state.

"It is just one piece of a very painful and complex puzzle that we need to be proactively working to deconstruct piece by piece," said Asante-Smith.

Dellinger added, "What we're expecting and hoping for is action. And there's a legal basis for it. And it just needs to happen." When ABC11 asked Dellinger, or else what, he replied, "Well, there's a lot of lawyers on the letter and they know how to file a lawsuit."