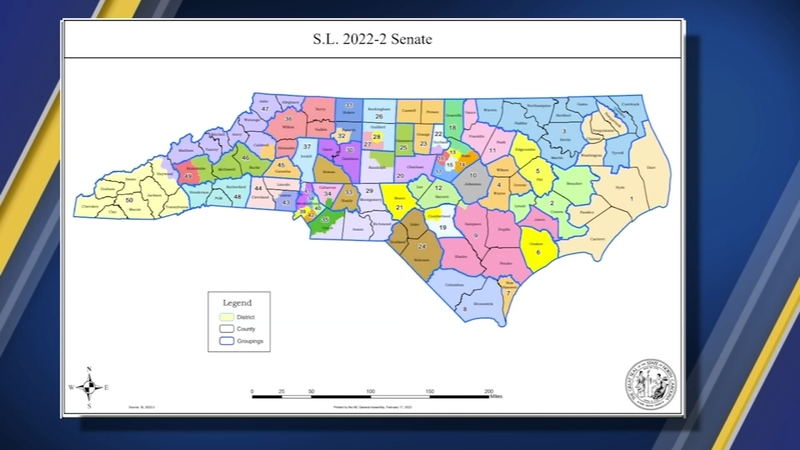 Candidate filing in North Carolina will resume Thursday as scheduled, as the state Supreme Court refused late Wednesday to delay the use of redistricting maps endorsed by trial judges earlier in the day.

The justices declined any delay despite a flurry of appeals from Republican legislative leaders opposed to the new lines for U.S. House seats, and lawyers for voters and advocacy groups unhappy with new state Senate districts that the trial judges upheld.

The decision also means primary elections will remain May 17. The Supreme Court had already suspended candidate filing in December and pushed back the March primary so that litigation challenging maps the Republican-controlled General Assembly approved in November could go to trial.

The state Supreme Court denied over a dozen motions late Wednesday without giving reasons why. There was also no information provided about whether some justices disagreed.

North Carolina's redistricting dispute is nearing its end as a panel of judges approved two remedial maps and unveiled a new one just hours before candidate filing is scheduled to reopen.

In a decision released just before noon on Wednesday, the three Wake County trial court judges welcomed the new district maps for the North Carolina House of Representatives and North Carolina Senate that were approved last week by the Republican-led General Assembly.

The panel of judges, however, rejected the updated version of North Carolina's 14 congressional districts and instead chose a model put together by advisors to the court known as Special Masters.

"We are proud to have secured the historic state Supreme Court ruling that resulted in a bipartisan state House map, and applaud the trial court on producing a congressional map that meets the Supreme Court's mandate," a spokesman for the North Carolina League of Conservation Voters, one of the plaintiffs in the case, said. "Our legal battle -- for fair maps, free elections, and a government that truly reflects the will of the people -- will continue."

The left-leaning NCLCV did appeal to the State Supreme Court to reject the State Senate map, which was approved in the Legislature by a party-line vote. Some Republicans, meanwhile, appealed to challenge the new congressional map.

"Today's ruling is nothing short of egregious," House Speaker Tim Moore, R-Cleveland, said. "The trial court's decision to impose a map drawn by anyone other than the legislature is simply unconstitutional and an affront to every North Carolina voter whose representation would be determined by unelected, partisan activists. Let me clear: this court has effectively taken a hammer to our state constitution and the rule of law, and I will appeal this ruling with respect to the congressional map immediately on behalf of the voters."

The Supreme Court assigned a panel of three Wake County Superior Court judges to evaluate the new maps and whether they unconstitutionally dilute the voting power of particular voters. The panel of judges then tapped three "special masters" to help them in the process: Tom Ross, the former president of the UNC system, as well as two retired jurists, Hon. Robert Orr and Hon. Robert Edmunds.

The Supreme Court's 4-3 ruling along party lines stated that the extreme partisan gerrymandering by Republicans violated several provisions in the North Carolina Constitution, including the right to free elections, freedom of speech and equal protection of citizens. The trial court, likewise, blasted Republicans for intentional, pro-Republican partisan redistricting, but stopped short of saying it was within the judiciary's power to be the referee.

Barring appeals to the Supreme Court later Wednesday that result in a delay, candidate filing resumes at 8 a.m. Thursday under the new boundaries for the May 17 primary. Candidate filing was suspended in December and the primary was delayed from March so lawsuits challenging maps could be tried.

Republicans currently hold eight of the state's 13 U.S. House seats, with North Carolina gaining a 14th seat this decade because of population growth.

The new court-drawn congressional plan, which state law indicates could be used for the 2022 elections only, makes changes that likely would help Democrats in winning a sixth seat, according to Asher Hildebrand, a Duke University politics professor and a former congressional aide.

Republicans would be in good shape to win seven seats. And an open seat stretching from parts of Raleigh south into three fast-growing suburban counties likely would be very competitive, Hildebrand wrote in a social media message. These changes would put obstacles in front of national Republicans seeking to win the seat totals needed to win a majority in the chamber next fall.

The congressional map the judges set aside Wednesday appeared to strongly favor a Republican candidate in six districts, while four strongly favored a Democrat. The other four were considered highly competitive.

Senate Leader Berger said it's "time to move on."

"We disagree with the interim Congressional map imposed by the Special Masters and are seeking a stay of that map, however, it's time to move on and allow the filing period to begin tomorrow morning."

Democratic Gov. Roy Cooper, whose veto stamp does not apply to redistricting maps and who is not a plaintiff, criticized the ruling for allowing the state Senate boundaries to stand.

"Today's decision allows a blatantly unfair and unconstitutional State Senate map that may have been the worst of the bunch," Cooper said. "That is bad for North Carolina because it strips voters of their voice in our democracy. Our elections should not go forward until we have fair, constitutional maps."