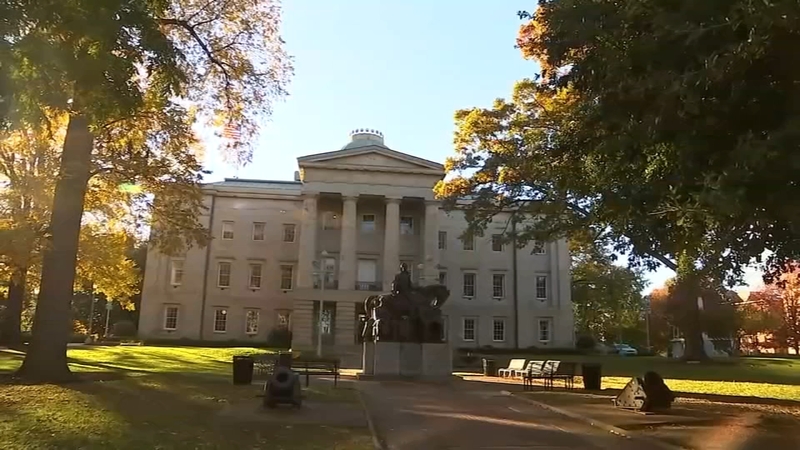 RALEIGH, N.C. (WTVD) -- The Republican-led General Assembly on Friday submitted three new voting district maps to a panel of judges as it hopes to satisfy a court ruling that sought to end extreme partisan gerrymandering.

"During the remedial map-drawing process we set out to draw maps that scored well based on the requirements of the Supreme Court's order and included as many competitive districts as possible," Sen. Paul Newton, R-Cabarrus and Union, said. "We accomplished that."

The maps divide the state into 120 districts for the North Carolina House of Representatives and 50 districts in the Senate; a third map divides the voters into 14 congressional districts.

"This remedial map reflects North Carolina's voters and political landscape, not a predetermined partisan outcome," Sen. Warren Daniel, R-Burke County, said of the congressional map. "In doing so, our state will have what we believe to be four of the most competitive districts in the nation."

The North Carolina House map earned broad bipartisan support after lengthy negotiations between Republican and Democratic leaders. In the Senate, however, negotiations broke down and the maps passed only on partisan lines.

"Republicans refused to work in good faith with Democrats to draw state Senate and Congressional maps which remedy unconstitutional partisan gerrymandering," North Carolina Democratic Party Chair Bobbie Richardson said. "Now all three maps will go to the Court, which will decide how best to proceed. But one thing is certain -- Legislative Democrats have never faltered in their commitment to fighting for the right of voters to choose who represents them."

The Supreme Court assigned a panel of three Wake County Superior Court judges to evaluate the new maps and whether they unconstitutionally dilute the voting power of particular voters. The panel of judges then tapped three "special masters" to help them in the process: Tom Ross, the former president of the UNC system, as well as two retired jurists, Hon. Robert Orr and Hon. Robert Edmunds.

"I think the message to the general voter is we're going to know soon," Chris Cooper, a political science professor at Western Carolina University, told ABC11. "It's a messy process, but we are getting more voices in the process this round and hopefully pretty soon we're going to start able to answer basic questions like who's running for office and where we, you might have the opportunity to vote."

According to Cooper, who testified in earlier rounds of the court proceedings on gerrymandering, the judges may give some leeway in what they see as unfair or simply fair game.

"A judge could say, 'Well, (these new maps) may not be ideal, but it's still legal,' or 'That's not ideal, and it's not legal.' That's where the judges are going to have to make their own choices," Cooper said.

The court must make a decision by noon Wednesday, as the candidate filing period opens the next day, Feb. 24.