Here's what the North Carolina coronavirus relief package means for you 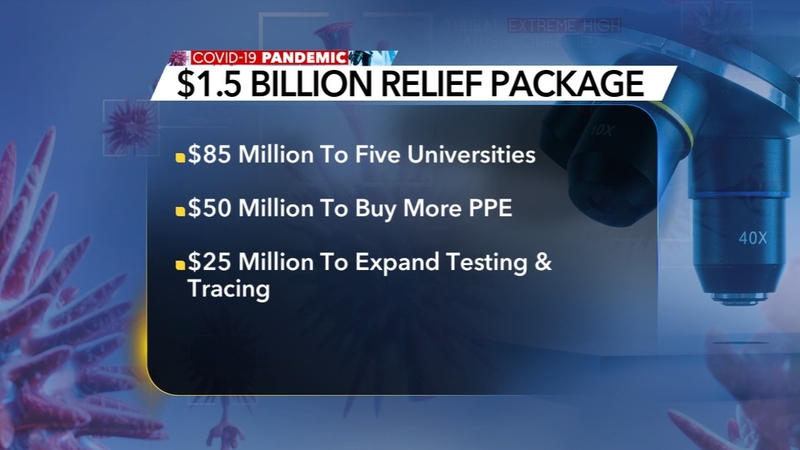 RALEIGH -- The General Assembly on Saturday finalized a relief package to address the new coronavirus pandemic in North Carolina, agreeing to send money to schools, hospitals, local governments and researchers.

A pair of bipartisan measures approved unanimously by the House and Senate direct how nearly $1.6 billion in federal COVID-19 funds are distributed and how scores of government activities during the outbreak are deferred or delayed.

Proposal that would have allowed North Carolina restaurants, bars to sell alcohol in mixed drinks to-go doesn't make it into relief bill

The bills, negotiated during the annual session's first week, were portrayed as the first of many actions to help commerce, health care and government struggling under business restrictions, short supplies and dwindling revenues.

"They are the product of a consensus approach that I hope can continue," he said in news release.

Cooper and GOP legislators have had a tumultuous relationship, marked by a 2019 budget impasse that was never resolved. Saturday's product represents a compromise between what the Senate and House approved separately earlier this week, with input from the governor and legislative Democrats seeking items in Cooper's own $1.4 billion request. The $1.6 billion is less than half of North Carolina's share received from the $2 trillion coronavirus relief law that Congress approved last month.

"That's what a crisis does. It gets folks to think about common ground," said Senate leader Phil Berger, a Rockingham County Republican.

Tips for deep cleaning your home to stay safe from coronavirus


DHHS can't access the $25 million, however, unless it releases additional data about COVID-19 testing and health conditions of patients.


The compromise limits civil liability immunity for hospitals and health care providers during the emergency, as well as for any "essential business" if a customer or employee is injured or dies from COVID-19 while working or conducting business there.

Car inspections and license renewals are delayed until August, interest accrued on income tax bills after April 15 is eliminated and marriage licenses and notarizations can be carried out remotely for awhile. And the K-12 schools will reopen a week earlier this August.

NASCAR expected to be first US sport to resume amid COVID-19: How it's preparing for May reopen

Deleted was a Senate provision to raise the maximum weekly state unemployment benefit from $350 to $400 once federal benefits are exhausted and a House provision to let still-shuttered restaurants sell take-out mixed drinks. The Senate also blocked a House provision that would have expanded Medicaid coverage temporarily for COVID-19 testing and treatment to more people. Lawmakers say other federal funds will cover such treatment.

North Carolina Senate Leader Phill Berger said he admired the leadership of the North Carolina General Assembly. Senate Democratic Leader Dan Blue added that he understood that the restrictions are difficult, but said the efforts by North Carolinians had saved lives.

"The bipartisan work we've accomplished shows what we can do when we put people above politics," Blue said.

House Speaker Tim Moore echoed Blue's sentiments, adding, "It's been very refreshing to see everyone put aside whatever differences they had or thought they had, and be able to work together for the common good."

House Democratic Leader Darren Jackson stressed that the bills signed into law Monday were just a beginning and said he is planning work on the next bill.

Jackson said he hopes the next bill will expand health care and provide more help for the more than 1 million unemployed workers in the state.

The legislature now won't return to Raleigh for session business until at least May 18. The Legislative Building was closed to the public while the General Assembly worked this week. Many legislators wore surgical masks, and more than one-third of the House members absent from the floor Saturday voted by proxy.