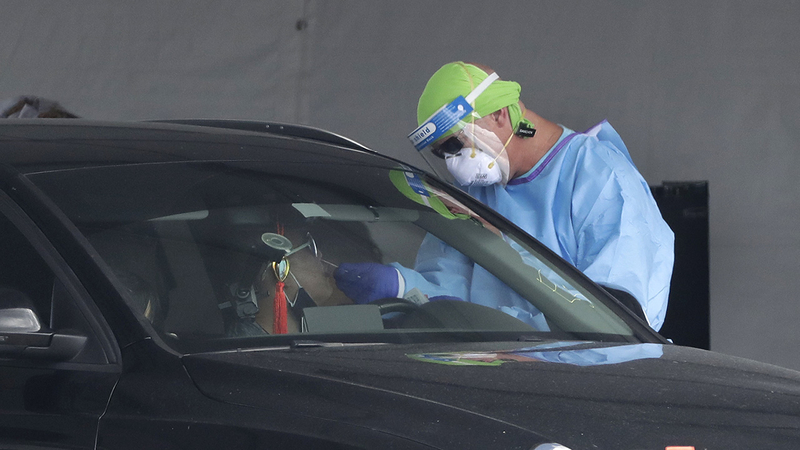 MIAMI -- Fighting a surge in coronavirus cases in the spring, Florida appeared to be "flattening the curve" as theme parks shuttered, sugar sand beaches closed and residents heeded orders to stay home. Now, it's almost as if that never happened.

Bars, restaurants and gyms began reopening in May - critics said it was too soon - and weeks later, the Sunshine State became one of the country's virus hot spots, experiencing an alarming surge in cases. On Thursday, officials reported 120 deaths in one day, the highest number since the previous record of 113 in early May.

"We thought maybe we could keep this thing under wraps. And that worked for a little bit of time," Dr. Jason Wilson, an E.R. physician at Tampa General Hospital, said during a conversation with Tampa Mayor Jane Castor that was livestreamed Wednesday on Facebook. "But eventually ... it caught up to us."

From Miami to Jacksonville and Tampa, hospitals in June and July have seen their numbers of coronavirus patients triple, with new patients outpacing those being discharged.

A record 435 newly hospitalized patients were reported Friday to have tested positive for the virus, including some who sought care for other reasons and aren't necessarily symptomatic. There were 6,806 patients being treated for COVID-19 in Florida hospitals, according to a new tally that state officials started releasing Friday. Before that, available data only showed overall hospital occupancy and capacity, including noncoronavirus patients.

Here's a look at the difference between two types of coronavirus tests, a diagnostic test and an antibody test.

Wilson and other health experts believe the spike was sparked in large part by young people who weren't experiencing symptoms and were more likely to take fewer precautions while gathering at reopened bars and crowded beaches.

"We saw the floodgates open really for young people having what we call asymptomatic or presymptomatic spread," he said. "Three weeks later, we are starting to see everyone else starting to get the virus as well."

The state's predicament echoes that of other current hot spots. Texas, which is marking its deadliest week of the pandemic, on Thursday reported a record daily death toll of more than 100, a new high for hospitalizations for the 10th consecutive day, and a nearly 16% positive test rate, its highest yet. In Arizona, hospitals were at nearly 90% capacity, with a record 3,437 patients hospitalized as of Wednesday, and a record number of those, 575, on ventilators, health officials said. Earlier in the week, a record high number of 871 patients filled ICU beds.

In Miami-Dade, Florida's worst-hit county, a few of the smaller hospitals have run out of ICU beds completely, though countywide there were still about 14% available as of Friday, the state health agency reported. Even hospitals with some of the biggest ICUs in the state are stretched: Tampa General currently has 70 patients who are infected, half of whom are in ICU beds, Wilson said.

More than 45% of intensive care units in Florida hospitals were at capacity or had fewer than 10% of their beds available as of Friday, the state Agency for Health Care Administration reported on its website.

However, many hospitals can convert additional beds to ICUs, and Gov. Ron DeSantis said at a news conference Friday that no major hospital in Florida had yet "gone to the surge level."

Florida Agency for Health Care Administration Secretary Mary Mayhew said her agency is working with hospitals to open up hospital beds by discharging patients who can be cared for at home through telehealth, and sending COVID-19 positive patients who don't need hospitalization to nursing facilities where they can be isolated.

"We're focused on how we can help hospitals decompress so that their beds again are used for individuals who absolutely require hospital level of care, both COVID and non-COVID," Mayhew said in an interview.

Chad Neilsen, the infection prevention director for UF Health Jacksonville hospital, anticipates the hospital will run out of rapid test kits in about two weeks or maybe sooner because manufacturers can't keep up with demand. He said the hospital instead will have to rely on commercial labs, which can take several days to issue results. Quest, a company that operates many such labs, said this week that it is potentially facing an even longer turnaround because of high demand.

Slower test results have a domino effect because a hospital has to assume that every patient with flu-like symptoms has COVID-19, meaning it will burn through its protective equipment and other gear much more quickly.

The rise in hospitalizations comes as physicians and nurses have been working around the clock for months, and during the summer, when facilities are typically low staffed. Gov. Ron DeSantis just deployed 200 nurses to fill staffing shortages in Miami and Tampa, and has pledged to send hundreds more.

"We're just overwhelmed with patients. ... Right now, it's like all hands on deck," said Esther Segura, a nurse at Miami's Jackson South Medical Center, who said she and her colleagues are weary after four months working in the pandemic. "Now we're just spiking all the way. Every day the numbers keep surging."

Physicians and hospital officials are also concerned about how long it takes to discharge patients.

Yolanda Villalobos of Homestead, Florida, said her husband, Julio Alejandro Berrios, was on a ventilator for weeks at one of the first intensive care units to fill up in the Miami-Dade area. The 37-year-old, 300-pound (136-kilogram) man was feverish, delusional and screaming in pain when Villalobos carried him out of their bedroom and delivered him into the hands of paramedics.

"I thought he would be there three days or a week at the most," Yolanda Villalobos said.

In both Jacksonville and Miami, doctors expressed worries about a noticeable uptick in the number of patients on ventilators. The Florida Hospital Association's interim president, Crystal Stickle, said providers are all trying to get their hands on remdesivir, which has been shown in a clinical trial to help with the disease.