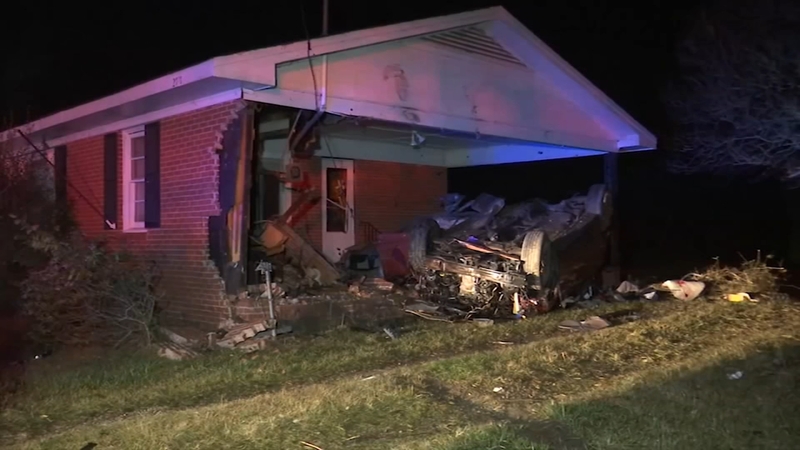 FAYETTEVILLE, N.C. (WTVD) -- A Cumberland County family is counting their blessings after an alleged drunk driver crashed into their home overnight.

It happened on Beard Road around 11 p.m. Wednesday.

The Eastover Fire Department said an unidentified female driver crossed railroad tracks, lost control of her vehicle and grazed a tree. The vehicle then rolled over, hit two houses and a parked vehicle.

Glass and debris were still covering the garage Thursday morning.

The mother and son who were in the home said the driver was violently thrown from the car and hit the house.

Stephen Music said he had just walked back into the house Wednesday night when he heard a crashing sound. Then, the power went out.

"All of a sudden I heard this 'blam' and then the power went out and then it was about a four or so seconds later and then there was another 'blam,'" he said.

Music -- who was in town to visit his mother for the holidays -- went out to see what happened.

"I saw the car and it was flipped upside down, it was right there," he said. "And I looked down and that girl was laying there and she was moaning and stuff and blood all over and I told momma, 'call 911!'"

Now Music and his mom, Wanda McLaurin, are counting their blessings.

"Thank God. Glad I have God on my side. Thank God she's not dead," McLaurin said.

Music said that officers at the scene told him sh was going more than 100 mph.

Firefighters told them that the house is currently not suitable for living. They plan on staying with friends nearby for now. Want to help? Fill out this form.