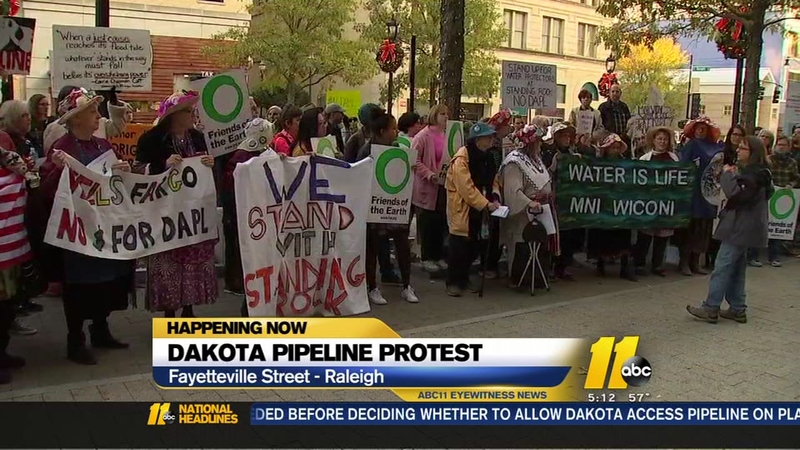 RALEIGH (WTVD) -- Dozens of protesters in Raleigh joined the National Day of Action Tuesday, peacefully chanting and holding signs outside the Wells Fargo building in downtown.

Protests were being held across the country, from California to Vermont. Activists called for demonstrations at Army Corps of Engineers offices and at banks financing the pipeline construction.

Protest against #DAPL and @WellsFargo funding of it, part of rallies being held nationwide, rejecting the oil pipeline. #abc11 pic.twitter.com/zv8imT8km6

The Corps on Monday called for more study and input from the Standing Rock Sioux before it decides whether to allow the pipeline to cross under Lake Oahe. The 1,200-mile pipeline that's to carry North Dakota oil through South Dakota and Iowa to a shipping point in Illinois is largely complete except for that stretch, which will skirt the tribe's reservation.

Deedee Carthens drove from Fayetteville to take part in the demonstration outside the Wells Fargo office.

"After everything that the Native Americans, that we have been through, to be relegated to a specific spot and OK, this is what you get. And as soon as you find out that there's something precious or worth money on there, it's kind of like OK, we're gonna take it back," she said.

One protester said she was going to withdraw her money from Wells Fargo because the bank is funding the Dakota Access Pipeline.

The group hand delivered a letter to the branch manager, addressed to the CEO, demanding the bank cut ties with the project.

Carthens said she was compelled to get involved, not only because she's a Native American, but because she feels the public is unaware of what's at stake; specifically, the potential for a break in the pipeline similar to what's happened with the Colonial Pipeline in recent weeks, leading to gas shortages across the southeast.

"If that affected the water that affects everybody down the river," said Carthens. "So they're not just protecting their land and their sacred sites, which is important, they're protecting everybody's water."
Twenty-eight protesters were arrested near Mandan, North Dakota, after a group of about 400 protesters put a truck and tree branches on BNSF Railway tracks near a pipeline work staging area and tried to set it on fire, Morton County sheriff's spokesman Rob Keller said.

"They had a rope soaked with kerosene," he said. "A (Highway Patrol) trooper with an extinguisher doused it so it wouldn't light."

Mandan is about 50 miles north of a camp where hundreds of protesters have gathered in recent months to oppose the pipeline.