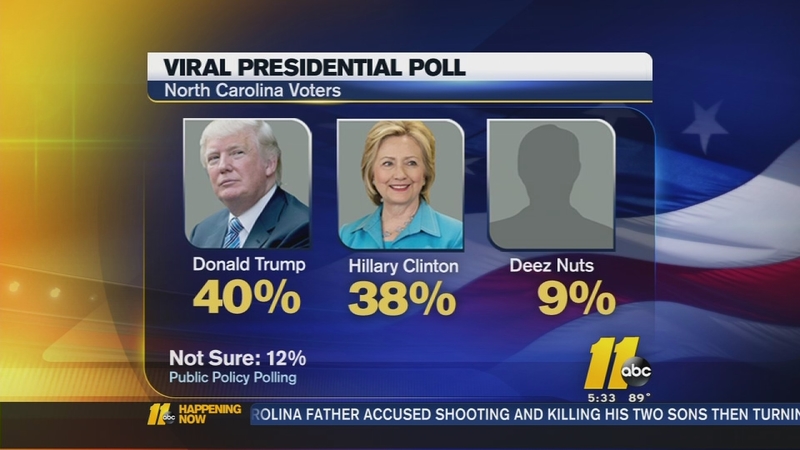 The poll made headlines around the world for finding that 9 percent of North Carolina voters were putting their support behind a candidate named "Deez Nuts." The result left many of us thinking, "is this for real?"

If you believe the political scientists the answer is "yes" and is indicative of a bigger problem about how we do elections in the United States.

"I think this guy getting 9 percent despite having a funny name and apparently being 15 years old really shows how many voters are looking for a third alternative this year," says Tom Jensen, director of liberal Public Policy Polling, the company behind the now infamous poll.

A spokesperson for the Federal Election Commission told ABC11 Wednesday night that the person who filled out the legal form to run for president had met the requirements to be listed as running, but the person's real name was not included.

It doesn't take much to run for commander in chief, all you have to do is fill out a form with the FEC called a "Form 2" and raise $5,000. Of course there's also the Constitutional requirement of being 35 years old, a requirement Olson a.k.a. "Deez Nuts" does not pass. He also hasn't raised a cent, much like the 600 other candidates running for president.

Which brings us back to the original question: Is this for real? Why would you poll this guy?

"For the humor value," says Jensen. "I mean this has been a long and tedious presidential election. It doesn't all need to be so serious. So, he's filed as an independent candidate and that's how we tested him."

And despite the funny, albeit vulgar name, there is a big takeaway here according to Jensen.

"Out of all the independents running, we probably picked the least credible one to poll. He still gets 9 percent and what you see there is if a serious candidate, somebody who's maybe been an elected official before, someone who's a successful business person or something like that, runs as an independent with a strong message and is able to raise serious money, that's somebody then who has the potential to be a serious contender next year."

It appears the controversy won't die down soon and it seems everyone now has an opinion on the poll-- even National Geographic.

.@ABC11_WTVD Can confirm that Deez Nuts is currently in the lead amongst squirrels pic.twitter.com/4Zy9CH9ZdY

"I think beyond just the 'ha ha ha' part of the poll, it's funny that someone with this funny, obscene name, polls so well," said Jensen.

"If you want to turn it into something serious, the serious message is, people are not happy with the two choices that the parties are heading towards. They want a third choice and there's a void out there for somebody a little more serious to fill."

ABC11 wants to hear from you, take our polls below (scroll further for the second one)