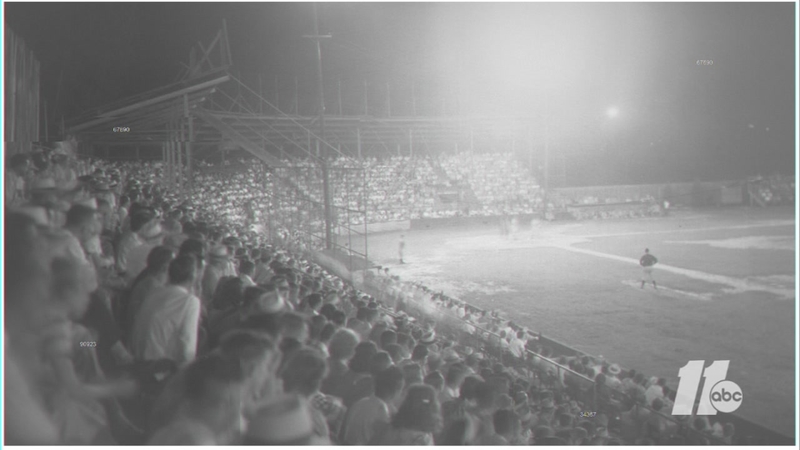 RALEIGH, N.C. (WTVD) -- Tucked away behind a row of old buildings on West Street, an unassuming parking lot leaves barely a trace of its glory days as Raleigh's minor league baseball stadium.

A crumbling cobblestone wall stretches along the overgrown pathway, with rusted steel rebar wires poking out the top like unshaven whiskers -- likely where the wooden plank bleachers and tin roof once attached. The sharply inclined hill behind the wall indicates the shape of the stadium seating, and vintage pipes hiding behind a veil of old vines hint where the restroom once stood beneath the bleachers. Sawed-off steel beams jut out of the sidewalk below, reminders of the destruction of the beloved baseball stadium in the 1970s.

If you stand atop the hill and look down at the paved parking lot, you can almost make out the shape of the baseball diamond and see where home plate once held baseball legends like Carl "Yaz" Yastrzemski, Ted Williams, Harold Clem, and Rich Mergler. Several players on the Raleigh Capitals (and later the Raleigh Pirates) went on to join major league teams and even the Baseball Hall of Fame.

Today, the park is quiet and overgrown, but in the 1950s Devereux Meadow held thousands of cheering Raleighites watching America's favorite national pastime.

The Capitals dominated the Carolina League, making it into the first three consecutive championships, and even defeating the Durham Bulls. In the 1940s and 50s, every little North Carolina town had their own baseball team -- the Winston-Salem Cardinals, Burlington Bees, Fayetteville Highlanders, Wilson Tobs, and Rocky Mount Leafs were among some of them.

"Raleigh's baseball players had groupies," he said. "They were on the diamond at night, and we thought of them as superstars. They had major league potential."

"The players would go swimming at Johnny's Motor Lodge," he said. "Well, in the 1960s in Raleigh, teenagers made money by mowing grass. The guy who owned the lodge lived in our neighborhood, so we'd go mow the grass around his hotel and meet the baseball players hanging out there."

"We were 13 and riding around in the back of the car with stars like Harold Clem and Rich Mergler. We'd ride by places the other kids hung out and show off; we were on top of the world."

Devereux Meadow was a quaint stadium, which hadn't changed much since it was built in the late 1930s -- a throwback to a simpler time. The outfield fence was notably tall, an homage to the Green Monster in Fenway Park. Vintage advertisements lined the fence, covering Capital Boulevard (then known as Downtown Boulevard).

"It wasn't uncommon to see a baseball bouncing across Capital Boulevard if someone hit a home run," Keith laughed.

The Golden Days of Devereux Meadow

Devereux Meadow was more than just a baseball stadium. It was a place for first kisses under the bleachers, little league practices and high school football games during the off-season.

"It was a great culture to grow up in. No cell phones. No internet. If you wanted to be entertained, you'd go to the ballpark."

Today's stadiums offer full-course meals, but back then the concessions were popcorn, peanuts and Coca-Cola. They were simpler times. No alcoholic beverages were sold, but people often carried brown bags into the games with them.

The simpler times and rural nature of Raleigh was reflected in the unique and fanciful entertainment rituals. Commonly, kids were allowed to come on the field and chase a pig. The kid who caught the pig would win a big prize -- including televisions and even ponies.

"Oh yes, I remember the pony!" said Keith. "I wanted to a win a pony, but my Dad asked, 'What on earth would you do with a pony? Where would you keep it?' I didn't have a good answer for him."

In an era before Raleigh had shopping malls, downtown Raleigh was still a popular place for shopping.

"Belk was downtown. We'd drive past the stadium every time we came home from shopping," said Keith. "In the winter, the southside parking lot for the stadium sold Christmas trees. I think it was one of the only places in Raleigh you could get a Christmas tree at the time."

Alas, the years were not kind to Devereux Meadow, as it was slowly run down.

"It was such a cool place to go, but thinking back it was kind of old and dilapidated," Keith said. Despite the simple and dated environment, the stadium was central to the Raleigh community, with thousands of people attending games and making family memories.

The End of Raleigh Baseball

In the golden era of Raleigh baseball, the Raleigh Capitals (and Pirates) were one of the only major sports teams in the city, and there were very few sports arenas.

But in the 1970s other sports began gaining popularity -- college basketball and football began edging out baseball.

The last two years the stadium operated, they combined with Durham, playing half their games at each location. In the early 1970s the stadium finally succumbed. For a few years the empty bleachers and abandoned rooms attracted vagrants, at least one of whom froze to death in the remains of the stadium. 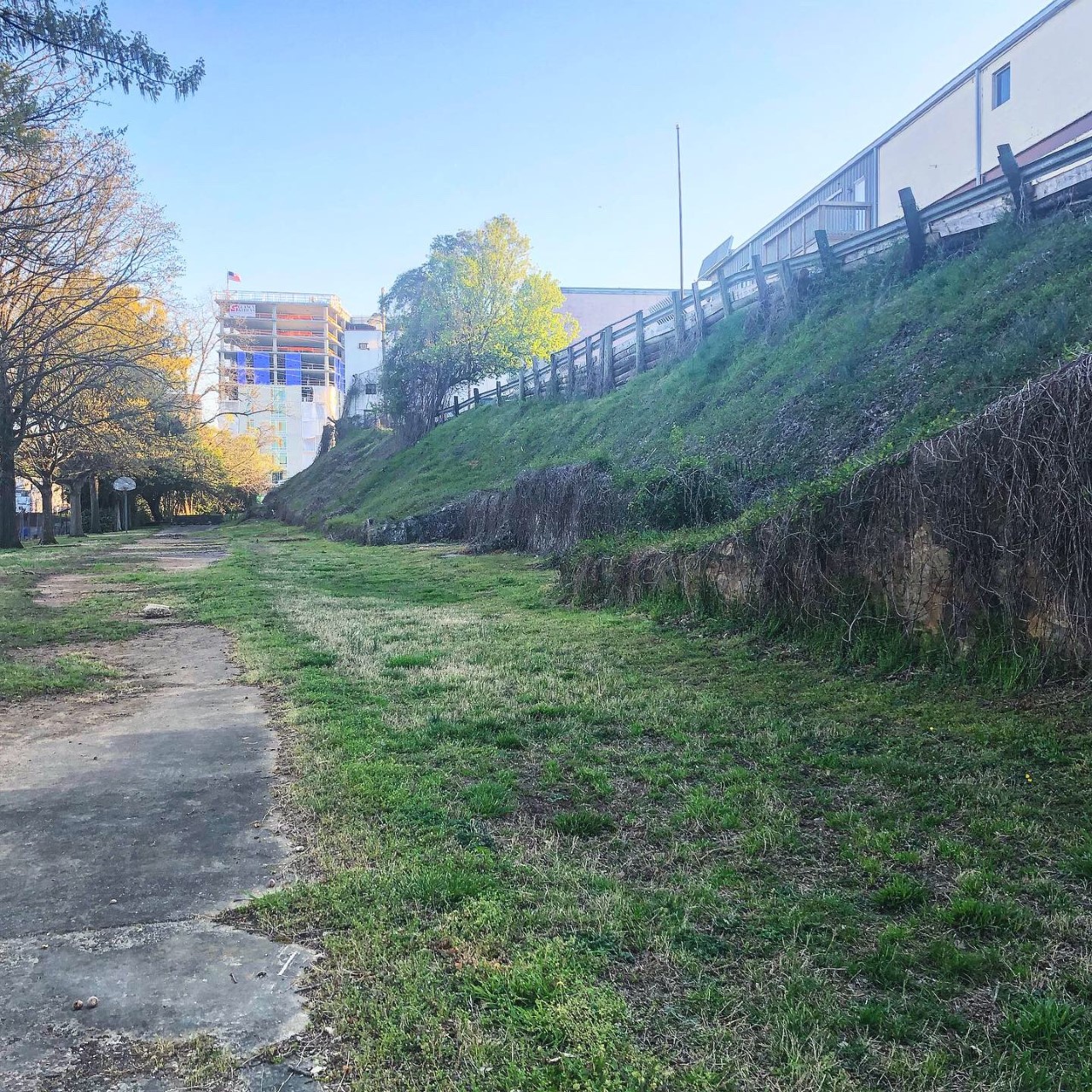 Photo from the Albert Barden Photo Collection, Courtesy of the State Archive

A Bright Future for Devereux Meadow

In the late 1800s, long before Devereux Meadow hosted a baseball stadium, the meadow served as a community park. It was used as a venue for lawn parties, as well as fundraisers for St. Savior's Church (which is now another part of Raleigh's lost history). A beautiful river, the Pigeon House Branch, once flowed across the meadow, back when downtown Raleigh had its very own river.

Given its historic use as a natural area in downtown and a place for community gatherings, it seems all the more tragic that the river has been buried and the meadow paved over. Fortunately, it seems Devereux Meadow may finally be revived as a natural space for downtown Raleighites to once again enjoy.

The City of Raleigh has developed a plan to bring life back to Devereux Meadow park. Beneath the remains of the baseball stadium, the buried river runs underneath Peace Street in an antique stone aqueduct. These tunnels have been referred to as the "catacombs of Raleigh," and stretch beneath Capital Boulevard and to Cameron Park. Now, a plan is in place to "daylight" the river and build a greenway, providing downtown Raleigh with a beautiful and scenic riverwalk.

"Anybody my age who grew up in Raleigh feels really feel nostalgic over Devereux Meadow. I wish we had kept it. It had a lot of good memories with it," said Keith.

After decades of being buried in the dirt, this piece of downtown Raleigh history may get a happy ending, returning to its roots as a slice of simplicity and nature in a bustling urban environment.