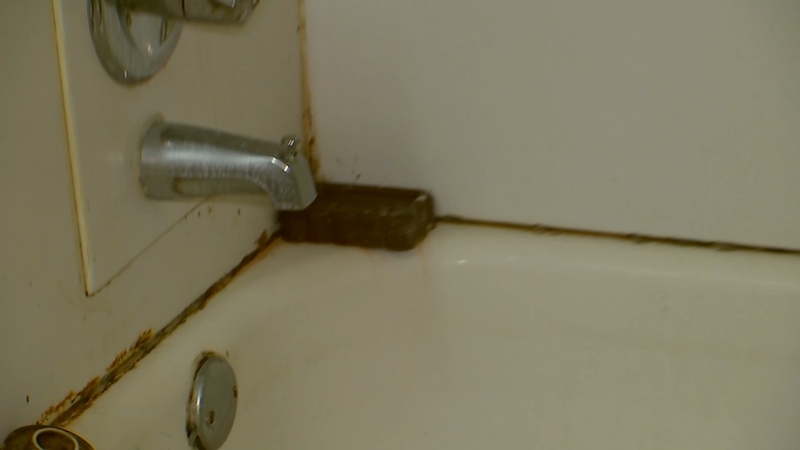 DURHAM, N.C. (WTVD) -- William Smith walks through his ranch home in the Club Boulevard community and points out all the concerns he has about his current conditions.

The property is owned by the Durham Housing Authority, which has fallen under harsh criticisms in the wake of the carbon monoxide crisis at McDougald Terrace.

"This is what our furnace looks like," Smith said. "I can't be breathing this in."

There's mold in the bathroom. A thick, black line surrounds the tub and there are marks on the ceiling.

"This is a repeated problem. It's all the way up the wall," Smith said.

In the kitchen, he shows where tiles are lower in one area of the room.

"You see how the floor slopes ... it's rotted out. I've asked them to fix that repeatedly," he said. "Why are the complexes so depleted? Why is so much of it in disarray?"

He shows a journal where he keeps track of every time he's reached out to DHA putting in a work order hoping to get something repaired or replaced.

Nobody has responded, Smith said.

"What's wrong with the math? There's something wrong," he said.

ABC11 reached out to DHA to ask about Smith's work orders. The agency said it would look into it.

DHA has started inspections in this community. Officials will be looking at the stoves, water heaters, and furnaces for carbon monoxide, gas leaks, and mold.

Smith said he's not at all surprised the inspections are now taking place here.

"They don't care about these stoves. They're doing this because y'all are on their backs," he said of recent media coverage.

Smith has been watching the crisis play out at McDougald Terrace. It's been nearly three weeks since folks were evacuated for their own safety.

Smith said he is not going to wait to learn whether something's wrong with his appliance. He's planning to replace it himself.

His message to DHA?